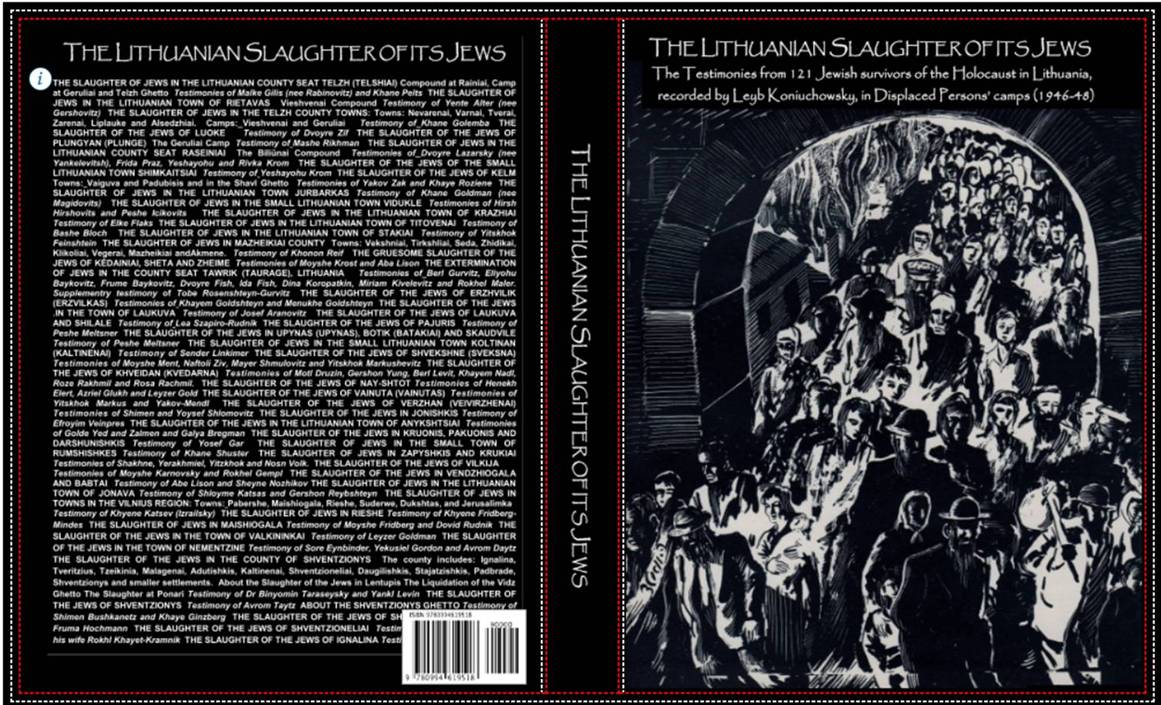 The Lithuanian Slaughter of its Jews

The Testimonies from 121 Jewish survivors of the

The Testimonies from 121 Jewish survivors of the

This book contains first-hand accounts from 121 Jewish survivors of the Holocaust in Lithuania, recorded by Leib Koniuchowsky in Displaced Persons’ camps from 1946 to 1948.

Grand Duke Vytautas the Great ruled Lithuania from 1386 to 1430. Early in his reign he granted Jews formal privileges, which formed the basis of the legal, political and economic structure of Lithuanian Jewry until the end of the eighteenth century.

More than five centuries after Vytautas, however, Jewish life in Lithuania was abruptly ended. Lithuanian Jews were slaughtered en masse in the second half of 1941.

The testimonies published here tell of the destruction of Jewish life in Lithuania. Perpetrators of the massacre, most of them Lithuanians, acted with enthusiasm and in many cases without help or supervision from the invading Germans.

The testimonies are not pleasant to read. They tell of the horrors and evils inflicted on Lithuanian Jews.  Many echo the same pattern of degradation and slaughter: Lithuanians first attacked Jews morally and spiritually, imposing assorted humiliating labours, torture and other evils; then began their physical annihilation.

Armed bands of self-described “partisans” took control of Lithuanian towns as soon as the occupying Soviets left. Often, even before the Germans arrived, these bands started to terrorise and abuse the Jewish population: Partisans and others broke into Jewish homes and brazenly looted Jewish property. Jailings, torture, and summary executions began shortly afterward. First to be killed were Jews with Soviet connections; later, any perceived or invented offence could mean execution, or a Jew could be killed for no reason at all. Jews’ non-moveable possessions were claimed by their Lithuanian neighbors, particularly the partisans and their families.

In towns and villages, new civilian administrations suddenly emerged from underground with the German invasion. Lithuanian mayors, police chiefs and civil servants worked hand in hand with the partisans and a few Germans. These new governments often worked to extort money, jewellery and household goods from the Jews.

Jews were harassed and subjected to harsh decrees. They were forced to wear yellow armbands, forbidden to walk on sidewalks, barred from trading or even talking with non-Jews, and permitted to leave their houses only at certain times each day. Jews had to report for forced labour that in many cases was designed to be demeaning, harsh and degrading. Guarded by armed Lithuanians, they were constantly tormented, humiliated, beaten and starved.

Jews were forced to remove Torah scrolls and holy books from synagogues and study houses and burn them. Rabbis were humiliated, often having their beards cut or ripped off. Jewish women were frequently raped, and often tortured and killed afterward.

Within several weeks of the German invasion, most Jews were forced out of their homes and confined in small, closed areas, without food or water, and subject to constant harassment and torture as they were prepared for the final slaughter. Many died during this process. Often their former neighbors turned up to watch Jews being beaten and bludgeoned. In other cases, Jews were crowded into tiny ghettos in rundown areas. Hunger, thirst, and filth was common, and disease followed.

Eventually, the Jews were taken to pits dug in nearby forests to be shot. Amid the chaos of this organized slaughter, many were buried alive in the pits. At times partisans broke small children on their knees or bashed their heads on trees before throwing them, half dead, into a pit.

WHO COMMITTED CRIMES, AND WHO KNEW

From the 121 testimonies published here, it is clear that the slaughter of the Jews was widely known. Townsfolk saw Jews being confined, tortured, abused and taken away. Peasants with wagons at times helped to transport Jews and their property.

Besides that portion of the population that actively participated in the slaughter of the Jews, or engaged in torture or rape, many local people appropriated or “inherited” Jews’ houses. The same happened with household property, including the clothes Jews had to remove at the pits before they were murdered. Money and jewellery not taken by the Germans or by those in charge was extorted by townsfolk or rural people.

It was common for Jews to entrust their property to Lithuanian friends or neighbors, “until after the war.” The mass slaughter meant that most often, this property was never reclaimed. In some cases Lithuanians later betrayed Jews who tried to recover their property.

On the other side, there were Lithuanians who were honest, and who risked their own lives and the lives of their family members to help Jews. Today we salute, honour, and thank them. Moreover, it is important to recognize that contemporary Lithuanians are not guilty of the crimes of earlier generations.

Yet the current Lithuanian government, unlike the German government, is reluctant to take full responsibility for genocide committed on its territory. Indeed, some of the perpetrators have been honoured as heroes for resisting the Soviet occupation. They have commemorative plaques and streets named after them. None of these “heroes” were prosecuted when alive.

The extent of participation in the genocide of Jews and collaboration with Nazis is still downplayed in Lithuania and the current Lithuanian government is seeking to legislate their responsibility away. We hope that this attitude and honouring of criminals will change.

IN MEMORY OF MY BELOVED

the Jews of Alytus ghetto by Lithuanian murderers

Leyb was the author and collector of these testamonies and a survivor of the Holocaust in Lithuania.

Leyb Koniuchowsky was born in Lithuania on 18 November 1910.

He graduated in 1928 from the Jewish Real Gymnasium in Vilkomir, and then studied civil engineering. He was an engineer by profession and resided in Kaunas (Kovno).

During the German occupation he lived in the Kaunas Ghetto and worked there until his escape.

He found shelter in a bunker at a farmer’s home where he remained until the liberation of Lithuania by the Red Army in 1944.

From 1944-46, he wandered through the war battered towns of Lithuania, collecting testimonies from the few Jews that survived.

Koniuchowsky continued to collect testimonies in She’erit Hapletah DP camps in Germany, where he lived for a few years.

From Germany he immigrated to the United States in 1951 and settled in New York, with help from the HIAS organization.

Leyb Koniuchowsky’s foresight and diligence in collecting these testimonies deserves to be acknowledged, recognised and honoured. Hopefully this publication will help towards this.

The testimonies collected by Leyb have been in archives for decades and their publishing is long overdue. I have been honoured to have been given the opportunity to publish them and salute and thank Leyb Koniuchowsky for leaving this legacy for us and generations yet unborn.

The Lithuanian  Slaughter of its Jews

THE SLAUGHTER OF THE JEWS OF LUOKE

Testimonies of Golde Yed and Zalmen and Galya Bregman