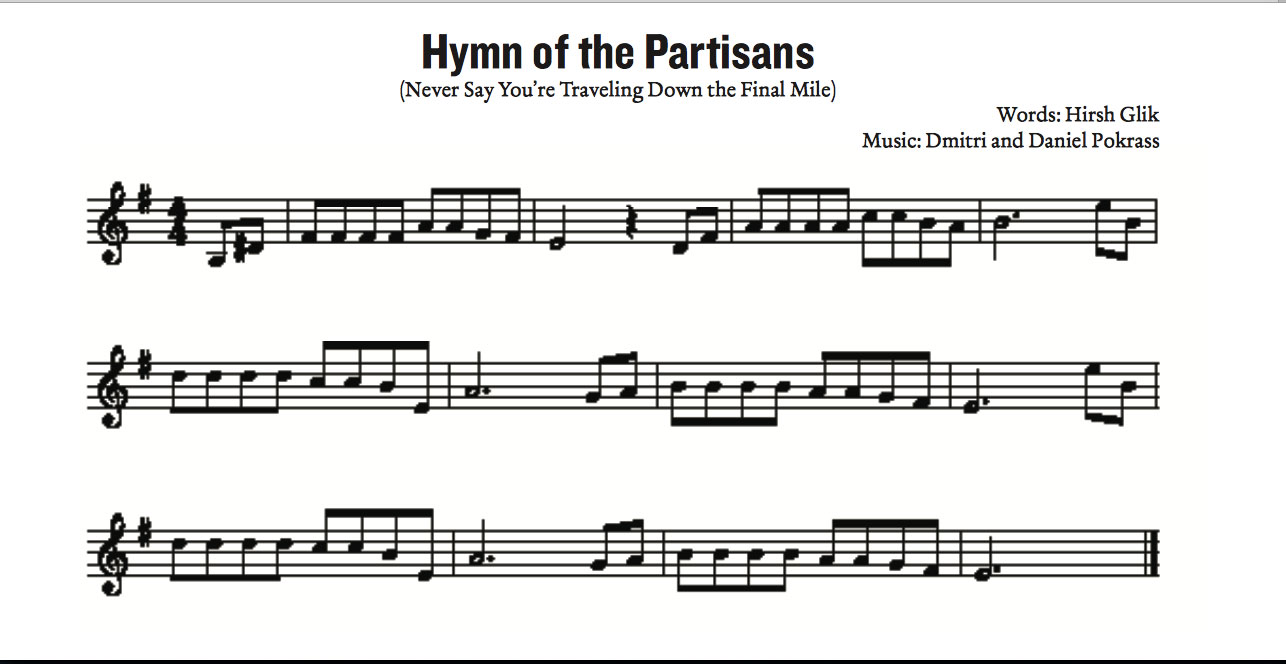 With different words in Russian

Adding music to the words

Rachel (Rokhl) Margolis (born 28 Oct. 1921 in Vilna), now resident in Rechovot, Israel, recalls the moment she bumped into Hirshke Glik on Strashun Street in the Vilna Ghetto (now Žemaitijos gatvė, Vilnius). He had just written what was to become the hymn of the Jewish anti-Nazi partisan resistance. Rokhl shares her recollection of how they came up with the melody. Filmed by Eran Torbiner, thanks to Daniel Galay and Leivick House Tel Aviv. 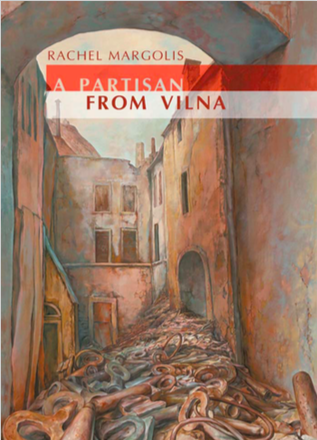 I was running home from the library down the Straszuna when I caught sight of Hirsz Glik. I knew him: he was my classmate, but he was already famous as an excellent Yiddish poet. Everyone loved him; he had a kind, open face, and it seemed as though a glow was radiating from him.

“Lalka, do you want me to read you my new poem? I haven’t read it to anyone else yet.”

“Go ahead, read,” I said, although I didn’t like poetry very much, espe- cially not in Yiddish.

Hirsz began to read with pathos:

The militant spirit and the thought behind this verse struck me: “Nev- er say that this is your final road.” These could be the words of our FPO anthem!

And suddenly I remembered the melody of “The Cossack Song” by Dmitry Pokrass. Those were not clouds, bringing thunder and storms,/ that lay in wait over the Terek like a fog./ The young Cossack’s pipes are calling/, the gray dust became a distant cloud.

I was a great fan of Soviet songs and was familiar with many of them.

“Hirsz,” I exclaimed, “I have the melody to a Soviet song, and your poem would fit beautifully with it. Its words are of no interest to us, but the melody is superb. The meter and the length of the lines correspond completely with yours.”

We were standing on a narrow sidewalk. Around us were people with yellow stars on their chests and on their backs. We did not pay them any attention at all – we softly sang the marvelous new anthem as a duet sotto voce. I was delighted that I had remembered that song; now it will stay in the anthem forever. When Dmitry Pokrass, the Soviet Jewish composer, came to Vilna to give a concert after the war, my girlfriend and I went up to him backstage and told him about the FPO anthem set to his music. He did not know anything about this. He did not then appreciate the fact that we had immortalized his name and melody, for the anthem of the FPO be- came the anthem of all the Jewish partisans in Europe.

We sang this song at the next FPO meeting. It quickly put down roots in the organization. We sang it in a whisper; it instilled hope and strength in our hearts. Now we sing it in Israel on the anniversary of the liquidation of the Vilna ghetto on September 23 and on other days of remembrance. Hirsz did not live to see the day of liberation. The Germans shipped him together with the entire second battalion of the FPO to the Estonian camp on September 1, 1943. In early spring 1944 he ran away, but the Nazis found him in the woods and executed him. His photograph remained behind; it showed an inspired young face full of goodness and hope. The words of his poetry resonate. Mir seine do! (We exist!). I placed the photograph and

a translation of the anthem into many different languages in a showcase at the Jewish Museum in Vilna.

According to the link –  While Hirschka finished reading the poem Zog Nit Keinmol to Rachel Margolis she mentioned to him that the tune of a Soviet composer Pokrass would be suitable to converting his poem to a hymn,
She recites the beginning of the hymn which uses Pokrass’s tune, it  has a similar rhytm to Hirschka’s poem.

Dear Eli
Please find attached recording of Zog Nit Keynmol by The Zemel Choir in London.  This was recorded at a service for National Holocaust Memorial Day at Westminster Abbey, January 2015.  Sorry, we don’t have a video of it.  The arrangement is by our Musical Director, Benjamin Wolf, and I attach a copy of it.
The Zemel Choir is the UK’s leading mixed voice Jewish choir.  Further information about the choir can be found at www.zemelchoir.org.
Regards
Philip Roth
The Zemel Choir
Sheet Music
Zog nit Keynmol

Thanks to Mikhail Matusov 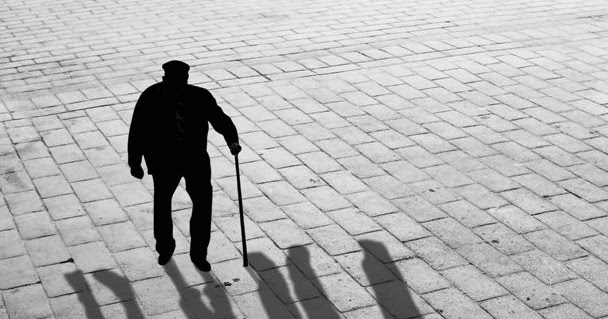 Thanks to Chaim Rubinstein

Thanks to Joseph Toltz & Jon Seligman