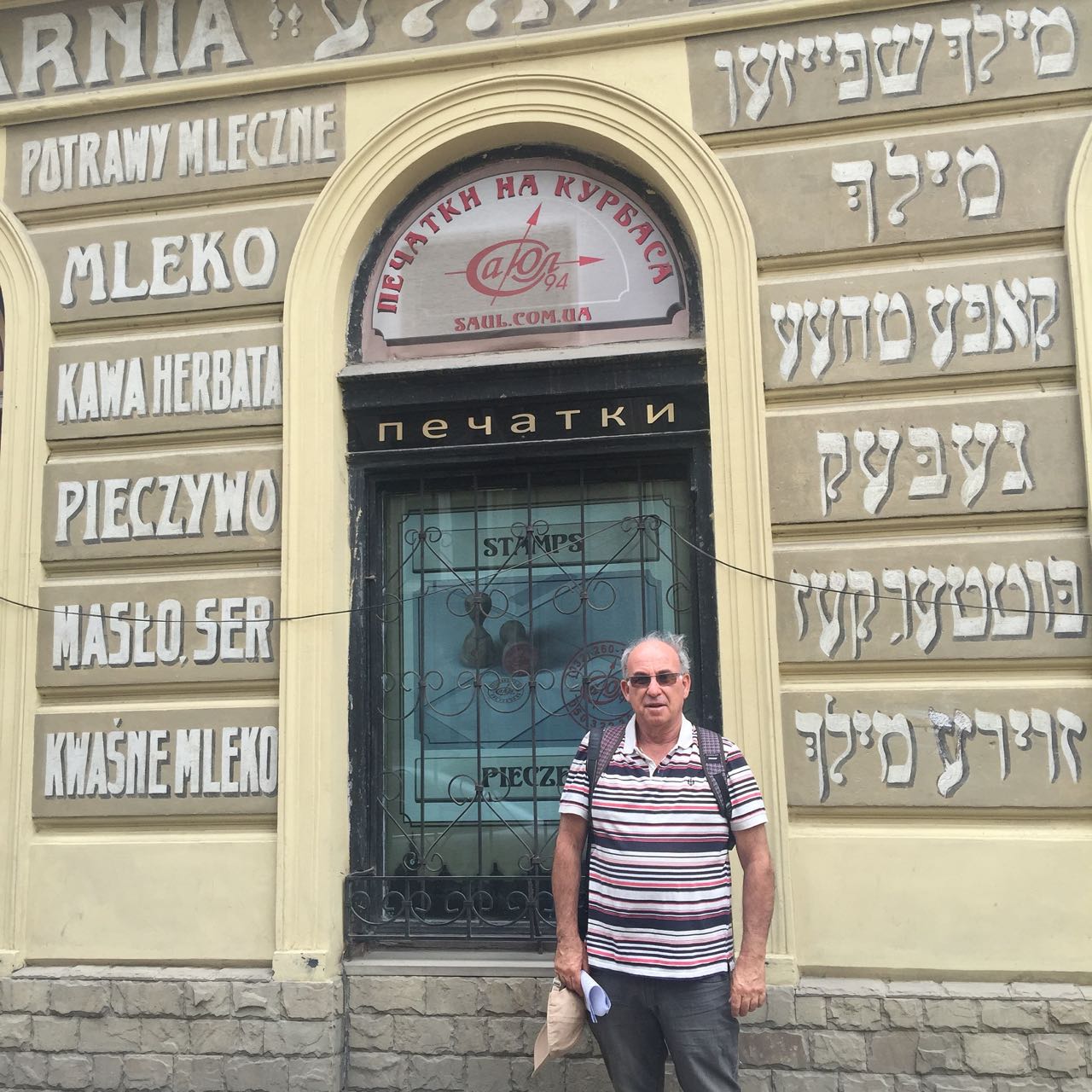 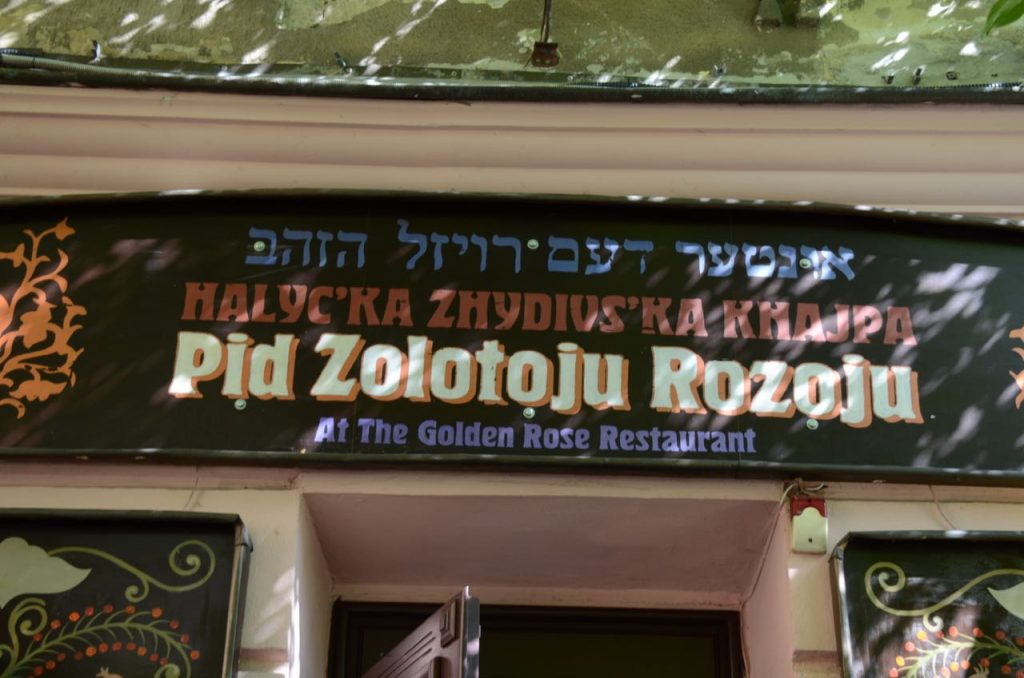 Arriving by overnight train from Kyiv

listen);[1]Russian: Львов, Lvov, IPA: [lʲvof]; Latin: Leopolis, “the city of the lion”), the largest city in western Ukraine and the seventh largest city in the country overall, is one of the main cultural centres of Ukraine. Named in honor of the Leo – eldest son of Rus’ King Daniel of Galicia. It was the capital of the Kingdom of Galicia–Volhynia (also called Kingdom of Rus`)[2] from 1272 to 1349 when was conquered by King Casimir III the Great who then became known as the King of Poland and Rus`. From 1434 becoming the regional capital of the Ruthenian Voivodeship in the Kingdom of Poland, then renamed Lembergin 1772 as the capital of the Habsburg Kingdom of Galicia and Lodomeria. In 1918 in a short time was the capital of the West Ukrainian People’s Republic. Between the wars, the city was known as Lwówand was the centre of the Lwów Voivodeship in the Second Polish Republic. After the Second World War, it became part of the Soviet Union (Ukrainian SSR) and in 1991 of independent Ukraine. Administratively, Lviv serves as the administrative center of Lviv Oblast and has the status of city of oblast significance. Its population is 729,429 (2015 est.)[3].

Lviv was the centre of the historical region of Galicia. The historical heart of the city, with its old buildings and cobblestone streets, survived Soviet and German occupations during the Second World War largely unscathed. The city has many industries and institutions of higher education such as Lviv University and Lviv Polytechnic. Lviv is also a home to many world-class cultural institutions, including a philharmonic orchestra and the famous Lviv Theatre of Opera and Ballet. The historic city centre is on the UNESCO World Heritage List. Lviv celebrated its 750th anniversary with a son et lumière in the city centre in September 2006.

The first known Jewish settlers in Lviv date back to 1256 and became an important part of this city cultural life, making significant contributions in trade, science and culture.[84] Apart from the Rabbinate Jews there were many Karaites who had settled in the city after coming from the East and from Byzantium. After Casimir III conquered Lviv in 1349 the Jewish citizens received many privileges equal to that of other citizens of Poland. Lviv had two separate Jewish quarters, one within the city walls and one outside on the outskirts of the city. Each had its separate synagogue, although they shared a cemetery, which was also used by the Crimean Karaite community. Before 1939 there were 97 synagogues.

Before the Holocaust about one third of the city’s population was made up of Jews (more than 140,000 on the eve of World War II). This number swelled to about 240,000 by the end of 1940 as tens of thousands of Jews fled from the Nazi-occupied parts of Poland into the relative (and temporary) sanctuary of Soviet-occupied Poland (including Lviv) following the Molotov–Ribbentrop Pact that divided Poland into Nazi and Soviet zones in 1939. Almost all these Jews were killed in the Holocaust. After the war, a new Jewish population was formed from among the hundreds of thousands of Russians and Ukrainians that migrated to the city, then called Lvov. The post-war Jewish population peaked at 30,000 in the 1970s. Currently the Jewish population has shrunk considerably as a result of emigration (mainly to Israel and the United States) and, to a lesser degree, assimilation, and is estimated at 1,100. A number of organizations continue to be active.

The Sholem Aleichem Jewish Culture Society in Lviv initiated the construction of a monument to the victims of the ghetto in 1988. On 23 August 1992, the memorial complex to the victims of the Lwów ghetto (1941–1943) was officially opened.[85] During 2011–2012, some anti-Semitic acts against the memorial took place. On 20 March 2011, it was reported that the slogan “death to the Jews” with a Swastika was sprayed on the monument.[86] On 21 March 2012, the memorial was vandalized by unknown individuals, in what seemed to be an anti-Semitic act.[87]

Lviv historically had a large and active Jewish community and until 1941 at least 45 synagogues and prayer houses existed. Even in the 16th century, two separate communities existed. One lived in today’s old town with the other in the Krakowskie Przedmieście. The Golden Rose Synagogue was built in Lviv in 1582. In the 19th century, a more differentiated community started to spread out. Liberal Jews sought more cultural assimilation and spoke German and Polish. On the other hand, Orthodox and Hasidic Jews tried to retain the old traditions. Between 1941 and 1944, the Germans in effect completely destroyed the centuries-old Jewish tradition of Lviv. Most synagogues were destroyed and the Jewish population forced first into a ghetto before being forcibly transported to concentration camps where they were murdered.[90]

Under the Soviet Union, synagogues remained closed and were used as warehouses or cinemas. Only since the fall of the Iron Curtain, has the remainder of the Jewish community experienced a faint revival.

Currently, the only functioning Orthodox Jewish synagogue in Lviv is the Beis Aharon V’Yisrael Synagogue. 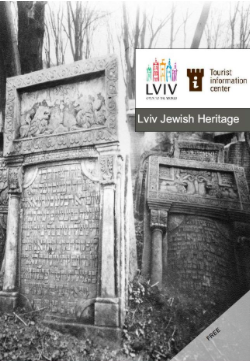 The Space of Synagogues 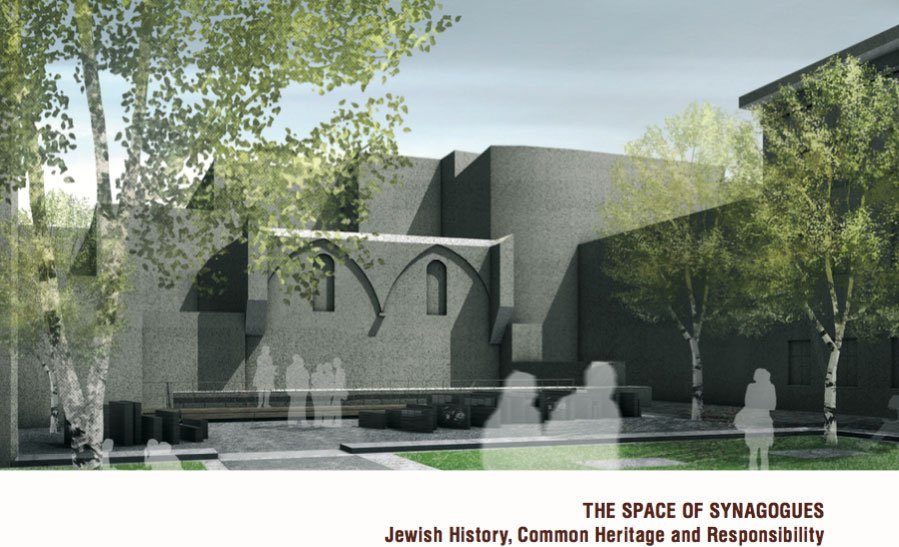 The Jakob Glanzer Shul, or the former Chasidim Synagogue, was a synagogue at the Ugol’naya street Nr.3 in Lviv, Ukraine.

The synagogue was built from 1841 to 1844 in a Baroque style. Its construction was financed by Lvov merchant Jacob Glazner, and in his honor named the “Jacob Glazner Shul”. In 1844 Jacob Glanzer’s synagogue was the second-largest synagogue, after the Big city synagogue. The synagogue has been constructed in a complex with two stores. There was a prayer hall and two tiers of galleries for women were attached. And two tiers of balconies over the west side of the Shul which was destroyed by the Soviets in the years 1959/60 (Noted by Rabbi B.Vernik) It was also the location (only*) of a mikveh. Noted rabbi David Kahane, author of a memoir about the Holocaust, worked in the synagogue. During the Soviet period, ( after 1960 ) it was used as a gym.

On the end of year 1958 a few months before we left Lvov my parents donated our own bath tub from our home on the Kalinina Street -(today Zamarstunivska Street) *helping to build a mikveh, at this time there wasn’t a mikveh on the premises, – ( The mikveh was on Pidval’na Street ) right afterwards the Soviets closedown the Shul! ( Noted by Rabbi B. Vernik ).

After the Second World War in this Synagogue served as a Rabbi Yaakov Gur-Aryeh which was the main spiritual leader of the Jewish community in Lvov. After the death of Rabbi Yaakov Gur-Aryeh Soviets closed the synagogue took literally everything and removed all the Sifrei Torah. that was considered to be in the hundreds and were in the synagogue, not only in the Aron Kodesh but also in the cabinets below each window of the synagogue were these all Sifrei Torah were accommodate. ( Torah Scrolls ) from all destroyed synagogues of the city and they have moved them directly to Moscow and the premises handed over to an Institute. The main prayer hall was converted to a Sports Hall, the western two tiers of galleries for women were dismantled, the beautiful murals on the walls and ceiling were over painted, the Aron Kodesh ( Torah Ark ) dismantled. Wall cabinets and all the nice furniture of the synagogue was dismantled. (( Amended by Rabbi B. Vernik who lived, grew up and studied in 58, then in 19 schools in Lviv after the war, until the day of the opening of the TV station on the High Castle Mount in the end of year 1958. )) The Synagogue was the main concourse despite of all this horror of Stalin’s and after Stalin’s dark days – a lot of people disappeared send to Siberia and have been killed.

The Prayers in this Shul were very, very warm with a lot of hope for much better times ! On the High Jewish holidays in the synagogue were thousands of people, but on Yom Kippur, it was just impossible to move, not only in the synagogue, as well as in the hallway and even a lot more of this, the Street of the Shul on afternoon so many people arrived and congregate, mainly students, who stood and talked quietly among themselves and waited for the Blow of the Shoifor, listening to the sound of the Shoifor which symbolized the end of Yom Kippur. In the great Hall of the synagogue could be heard “the thundering ” wonderful voice of the 85 years old a famous **Cantor Boruch Leib Shulman. In the small Hall across the corridor were praying the Talmidej Chahomim and many Chasidim of different backgrounds and mostly were without a beard. On Saturdays there were three praying groups (Minian), one early morning at five o’clock in the morning, because they have to go to work early, a second group at seven o’clock in the morning, and the third group the talmidej chachomim and a lot of the Hasidim on nine o’clock Minian. On the weekdays there were every day Minianim. On the Shul back yard were working two Shochatim for chicken. On the Succoth holiday there were a Suka – this all was happened in a horrible Stalin’s and after Stalin’s days between the years of 1946 -1958 – ( this is my testimony and a witness from my very young age. )

By Rabbi B. Vernik.

Since 1989 it has been used as a center of Jewish culture, the “Sholom Aleichem Jewish Culture Society”. External walls of a building were repaired in 1990. (The window immured on the left side is the external indicator of the location of the Holy Ark.)

Other views of Lviv