The Great Choral Synagogue of Kiev, also known as the Podil Synagogue or the Rozenberg Synagogue, is the oldest synagogue in Kiev, Ukraine. It is situated in Podil, a historic neighborhood of Kiev.

The Aesopian synagogue was built in 1895.[2] It was designed in Neo-Moorish style by Nikolay Gordenin. Gabriel Yakob Rozenberg, a merchant, financed the building.[2] In 1915 the building was reconstructed by Valerian Rykov. The reconstruction was financed by Vladimir Ginzburg, a nephew of Rozenberg.

In 1929, the synagogue was closed. During the German occupation of Kiev in World War II, the Nazis converted the building into a horse stable.[3]

Since 1945, the building has again been used as a synagogue. In 1992, Yaakov Bleich was appointed rabbi of the Jewish community of Kiev and chief rabbi of Ukraine. 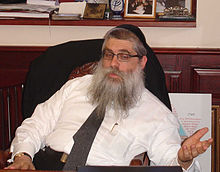 Yaakov Dov Bleich (born 19 October 1964) is an American-born rabbi and member of the Karlin-StolinHasidicdynasty. He has been widely recognized as Chief Rabbi of Kiev and all of Ukraine since 1990[1] and has served as vice-president of the World Jewish Congress since 2009.[2]

He graduated from Telshe Yeshiva High School in Chicago, Illinois where he began his rabbinical studies. From 1984-1986, he studied at the Karlin Stolin Rabbinical Institute in Jerusalem, and received his Rabbinical ordination (semicha) at Yeshiva Karlin Stolin in Brooklyn.

In 2005 he was one of three contenders for the role of chief rabbi, alongside Chabad Lubavitch appointees Azriel Chaikin (appointed 2002) and Moshe Reuven Azman (appointed 2005).[3] There is also a Progressive (Liberal/Reform) Chief Rabbi of Kiev and Ukraine, Alexander Dukhovny. But Rabbi Yaakov Bleich has always been recognized by the government as chief rabbi of Kiev and Ukraine.

In 2008, Kievan weekly magazine Focus named Bleich among the most “powerful foreigners” in the country.[4]

Rabbi Bleich grew up in Borough Park, Brooklyn. In 1987, he married Bashy Wigder of Monsey, New York.History of the Jews in Kiev

History of the Jews in Kiev

The first mention of Jews in Kiev is found in the 10th century Kievian Letter, written by local Jews in ancient Hebrew. It is the oldest written document to mention the name of the city. Jewish travelers such as Benjamin of Tudela and Pethahiah of Regensburg mentioned the city as one with a large Jewish community. During the Mongol occupation the community was devastated, together with the rest of the city, but the community revived with the acquisition of the city by the Polish–Lithuanian Commonwealth. During Polish–Lithuanian rule, Jews were allowed to settle in the city, but they were subject to several deportations in 1495 and again in 1619.[1] 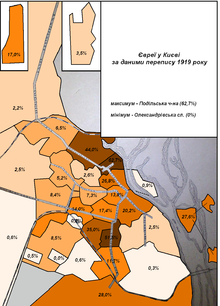 Brodsky Synagogue around 1970; then used as a puppet theatre and currently used as a synagogue[2][3]

In the 19th century the Jewish community flourished and became one of the biggest communities in Ukraine. In that period many synagogues were built including the city’s main synagogue, the Brodsky Synagogue. Jewish schools and workshops were built all around the city.

The community suffered from a number of pogroms in 1882, and again in 1905, when hundreds of Jews were murdered and wounded. The Beilis trial, in which a local Jew, Beilis, was accused of the ritual murder of a child, took place in the city in 1903. Beilis was found innocent.

During the Russian revolution and the Ukrainian War of Independence the city switched hands several times with new pogroms against the Jews. After the establishment of the Ukrainian SSR the Jewish population grew rapidly and reached approximately 224,000 people in 1939.[1]

At the beginning of the Nazi invasion of the Soviet Union most Jews escaped from the city. The remaining 33,771 Jews were concentrated in Babi Yar, and were executed by shooting on September 29-30th 1941, in an act that became one of the most notorious episodes of the Holocaust. Another 15.000 Jews were murdered in the same place during 1941-1942.

After the war the surviving Jews returned to the city. On September 4–7, 1945 a pogrom took place and [4] around one hundred Jews were beaten, of whom thirty-six were hospitalized and five died of wounds.[5] In 1946 there was only one operating synagogue in Kiev. The last rabbi to officiate in Kiev was Rabbi Panets, who retired in 1960 and died in 1968; a new rabbi was not appointed.[1] After the collapse of the Soviet Union in 1991, most of the Jewish population emigrated from Kiev. After Ukrainian independence there was a revival of Jewish community life, with the establishment of two Jewish schools and a memorial in Babi Yar, where an official ceremony is held every year.[6]

Ukrainian Rabbi Moshe Reuven Azman called on Kiev’s Jews to leave the city and the country if possible, fearing that the city’s Jews will be victimized in the chaos during Ukrainian revolution of 2014: “I told my congregation to leave the city center or the city all together and if possible the country too… I don’t want to tempt fate… but there are constant warnings concerning intentions to attack Jewish institutions”.[8]Moreover, the CFCA (the Coordination Forum for Countering Antisemitism) reported more than three antisemitic incidents occurred in Kiev since the 2014 Crimean crisis.[9] Both the pro-Russian Ukrainians and the Ukraine-government supporters blame each other in the exacting situation of the Jews of Kiev. Leaders of Ukraine’s own Jewish community have alleged that recent anti-Semitic provocations in the Crimea, including graffiti on a synagogue in Crimea’s capital that read “Death to the Zhids,” are the handiwork of pro-Russian Ukrainians. Rabbi Yaakov Dov Bleich, who presides over Ukraine’s Jewish Federation, signed a letter asking Russia to end its aggression, and compared the current climate in Crimea to that of pre-Anschluss Austria.[10] The memorial Menorah in Babi Yar was desecrated twice with sprayed swastika, during Rosh Hashana and a couple of months later. [11] [12] During June 2015 there was an explosion in a Jewish-owned shop in Kiev. An extreme right-wing organization claimed responsibility for the incident.[13] Later that month, the memorial Menorah in Babi Yar was desecrated again.[14]