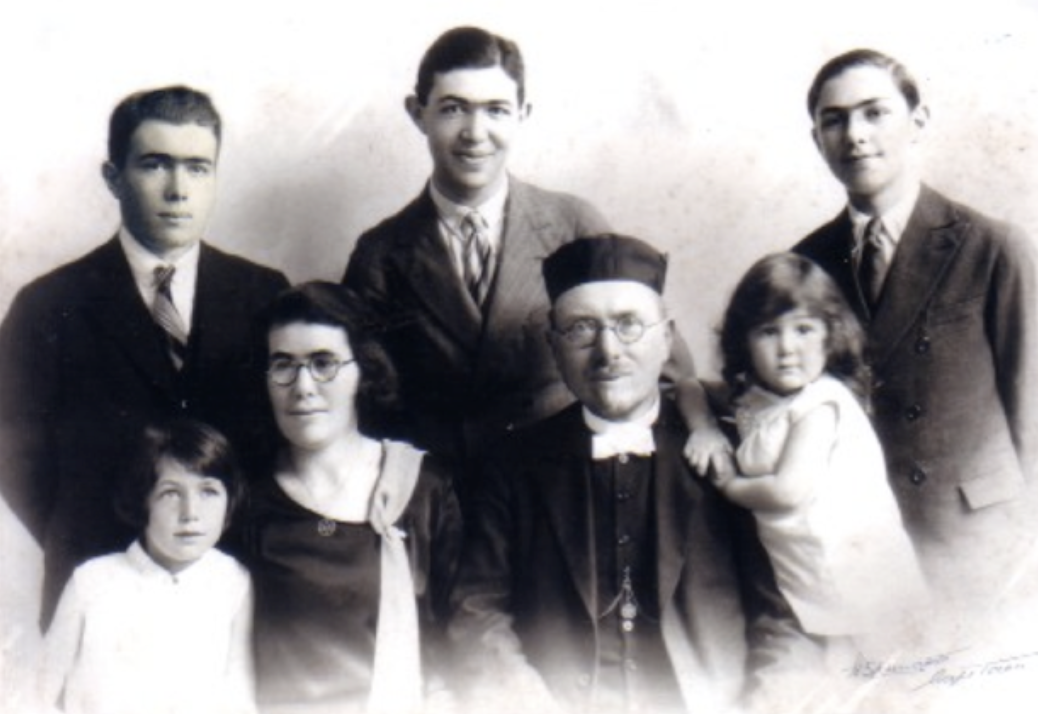 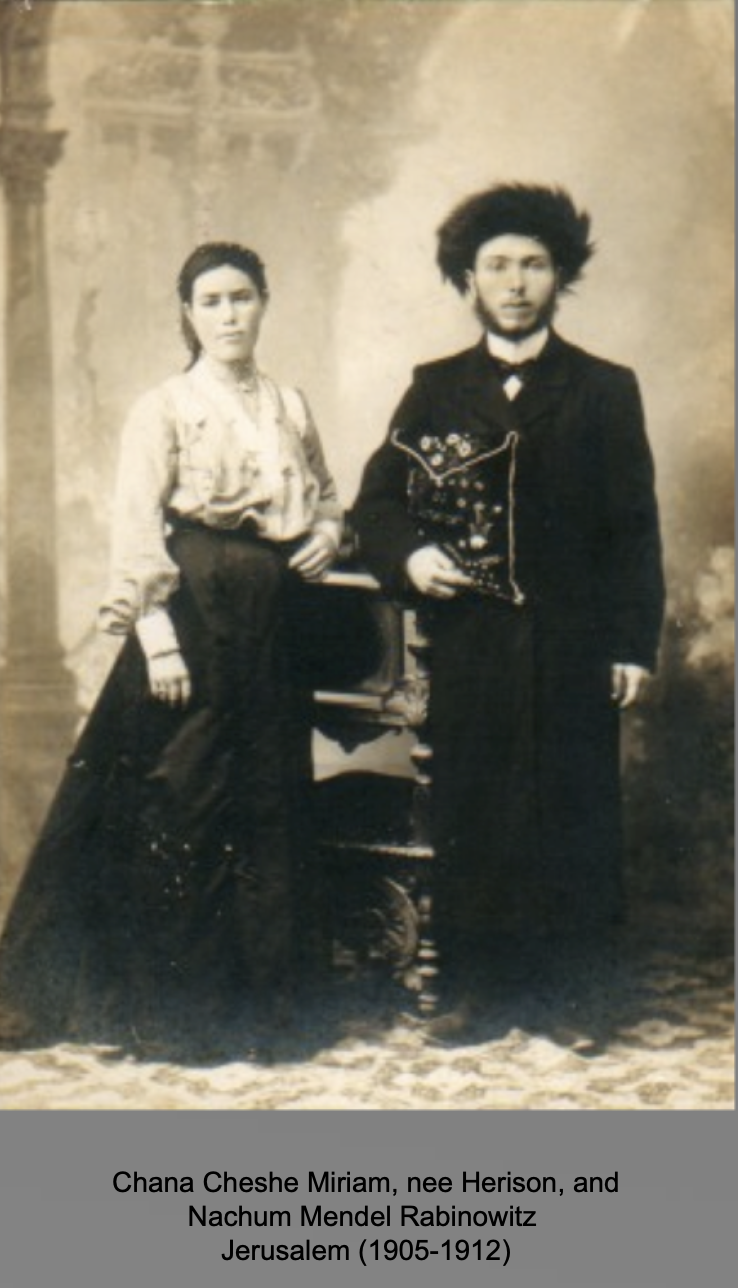 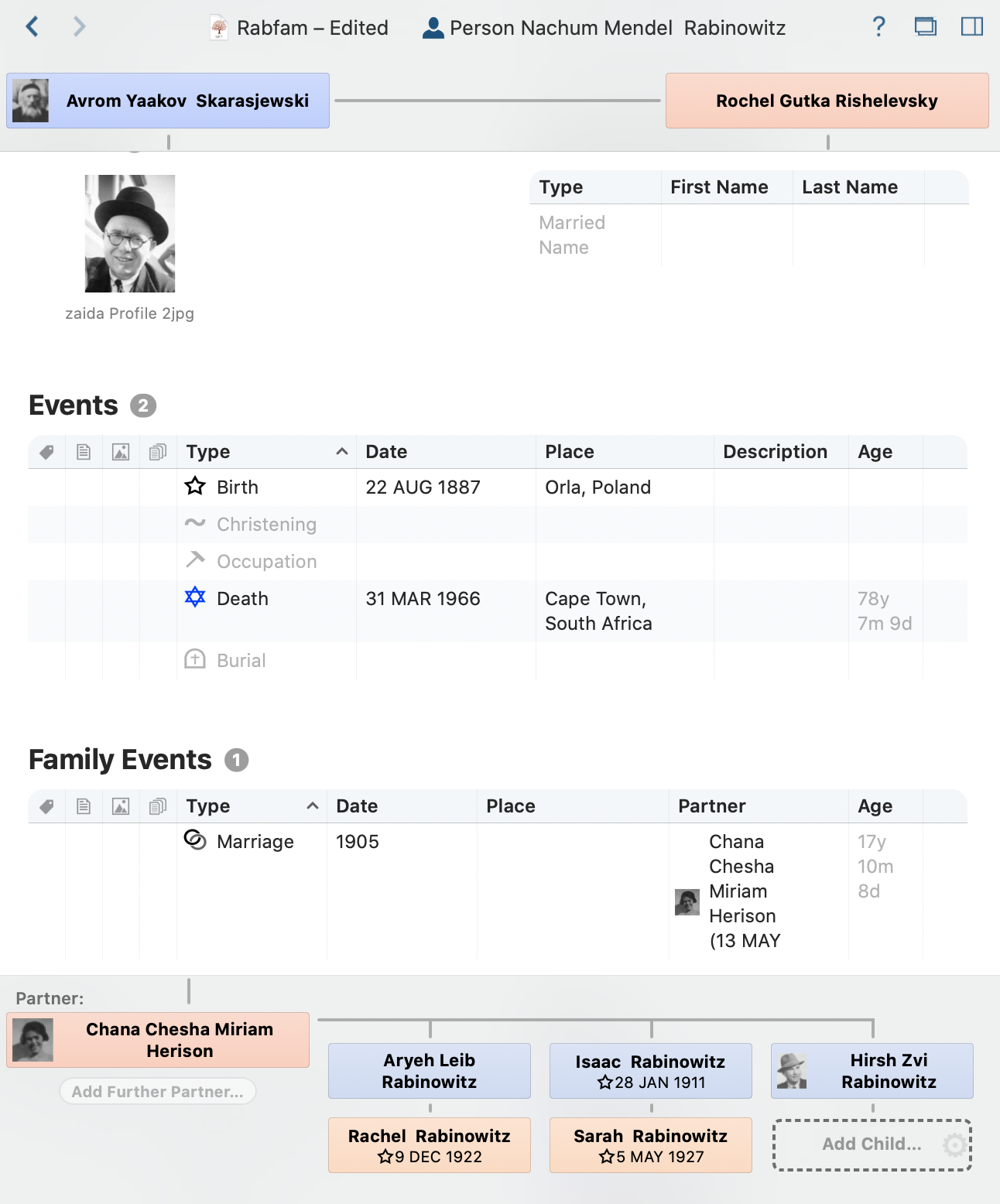 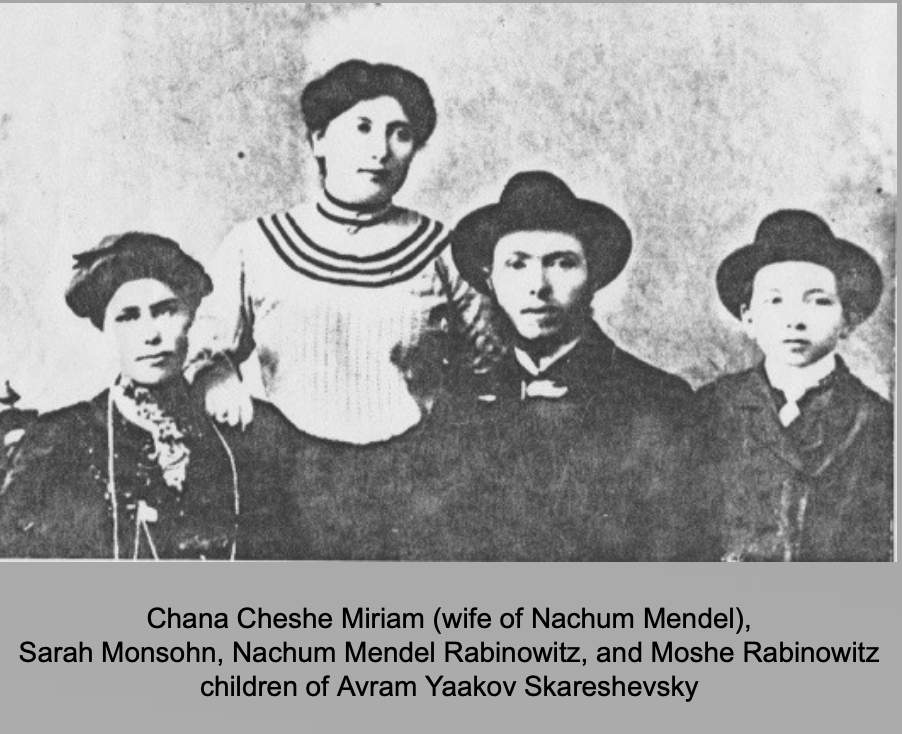 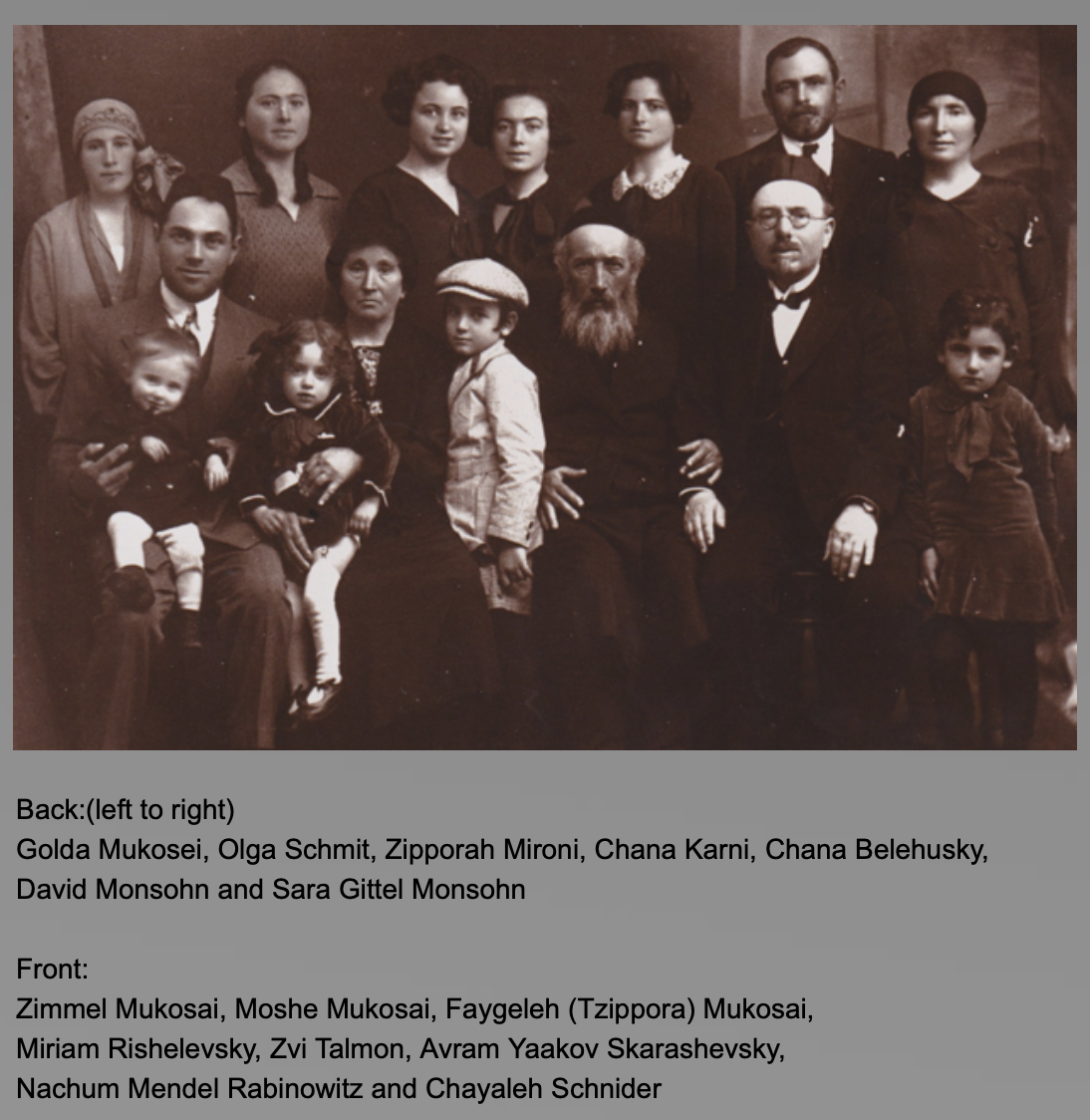 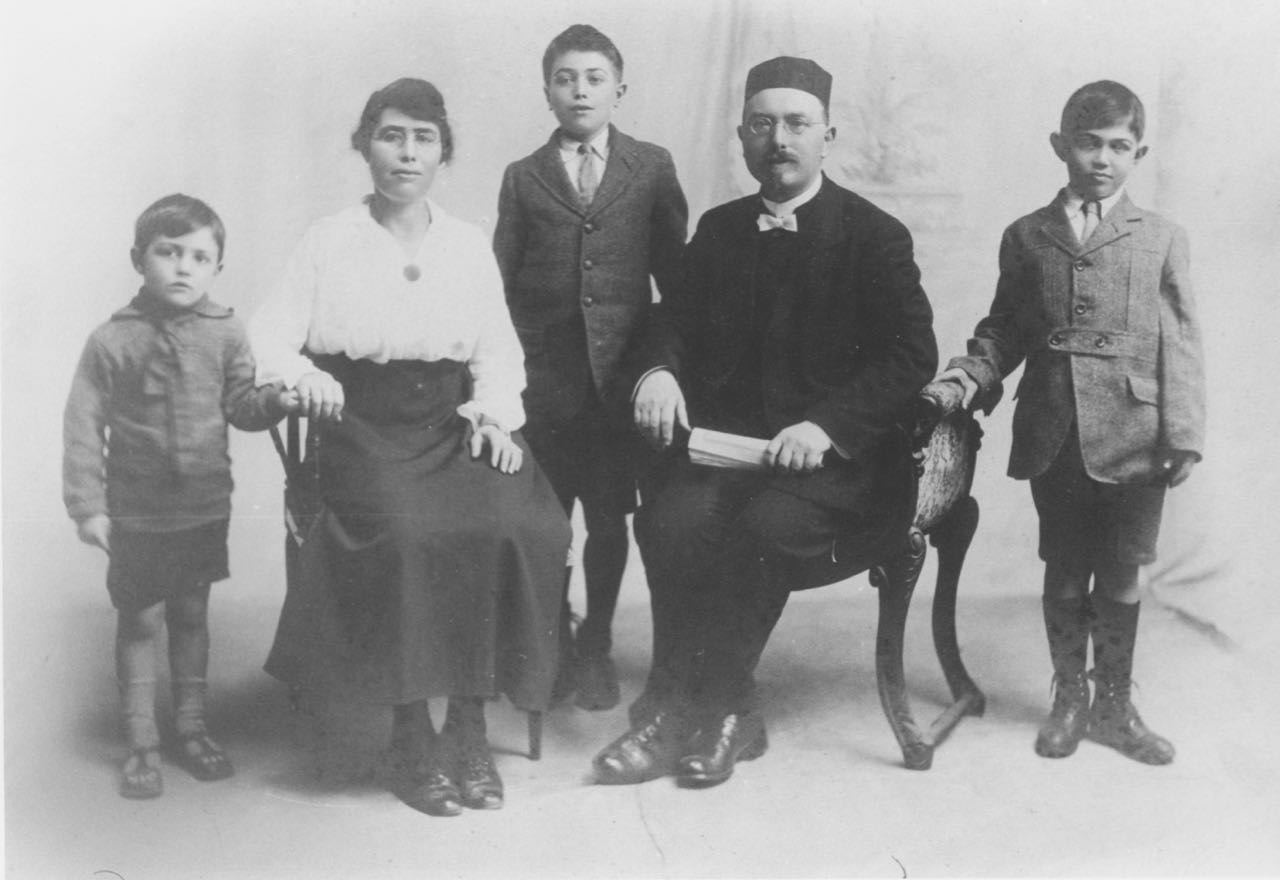 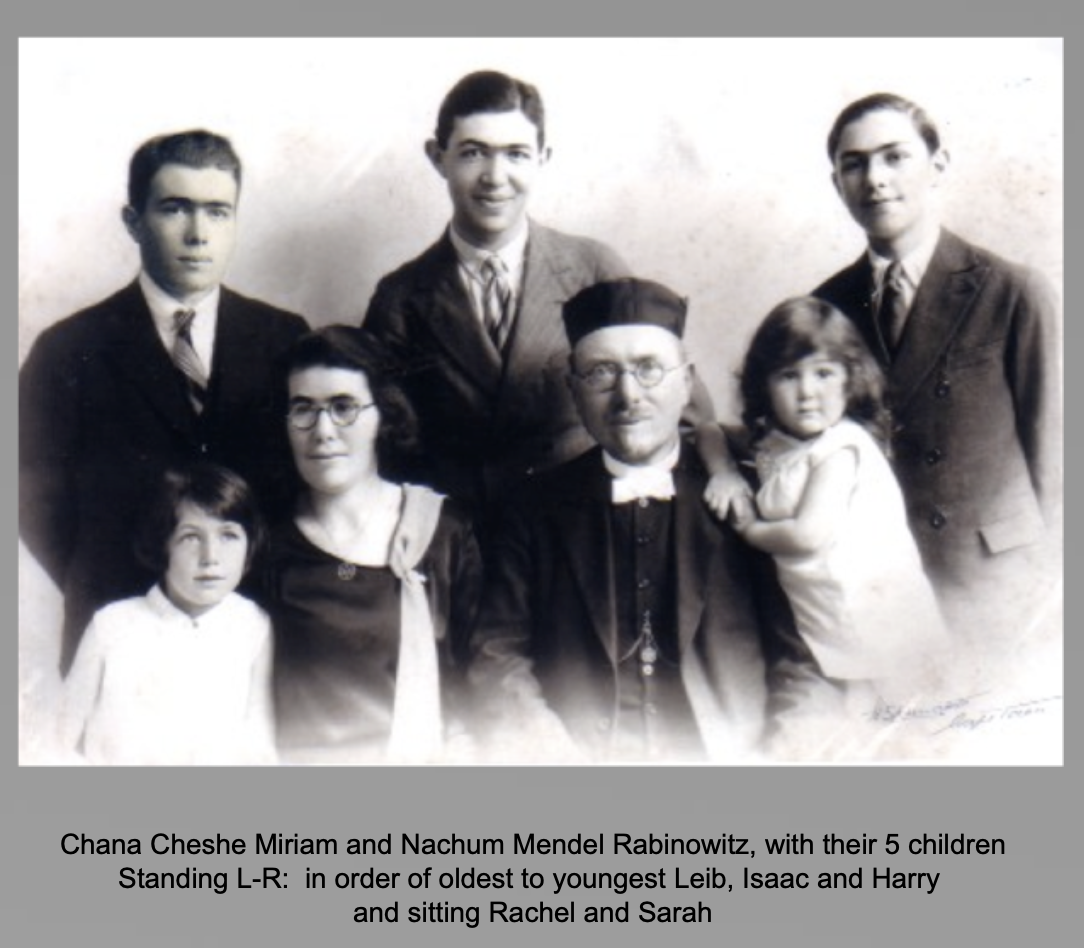 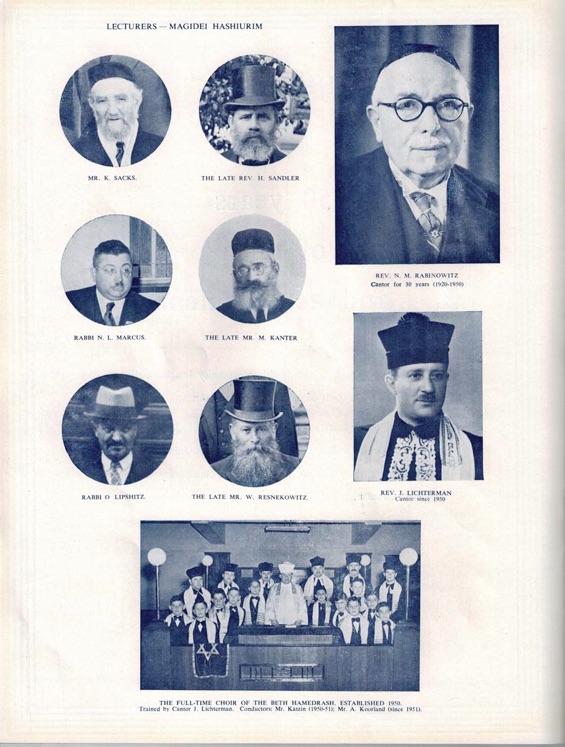 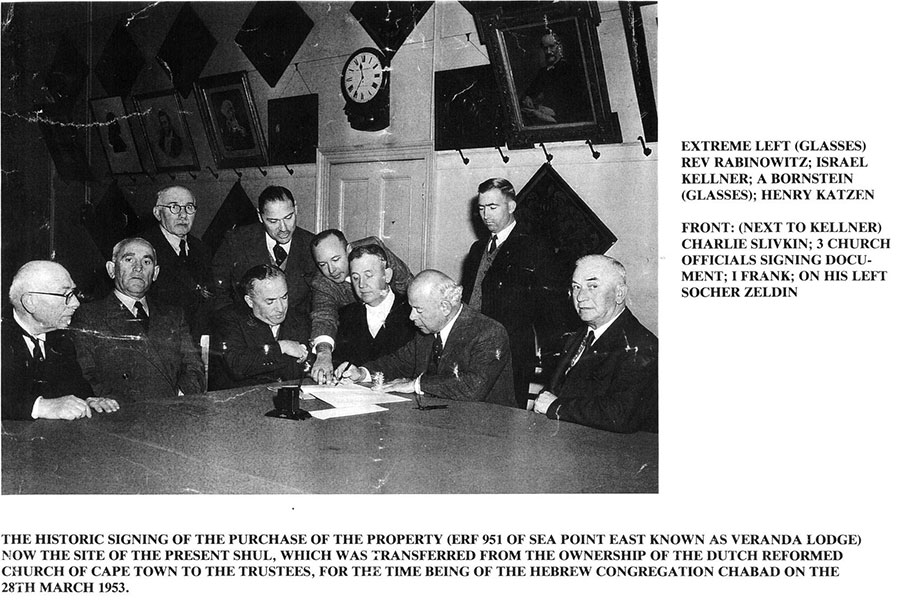 The visit of Rav Kahaneman to Cape Town

Rev NM  – second row from The front, third from the left 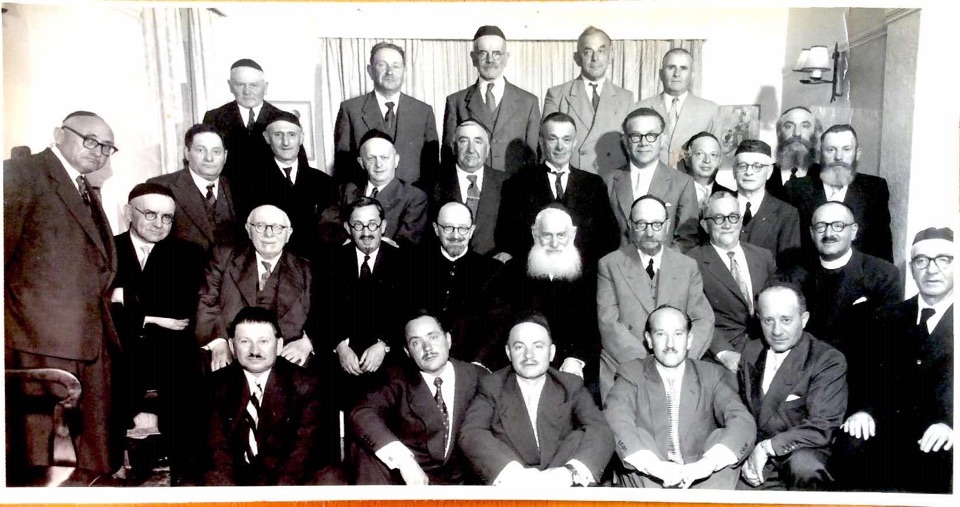 My name is Eli Rabinowitz. I live in Perth, Australia.  My three siblings live in New York, Israel and South Africa. I am married to Jill Reitstein (originally Rotzstejn, from Nasielsk).

Rev NM Rabinowitz benching with two of his sons, Leib and Harry, at Sorrel and Gidon Katz’s wedding in Johannesburg 1961

Zaida with me at 107 Corlette Drive, Birnam, Johannesburg. 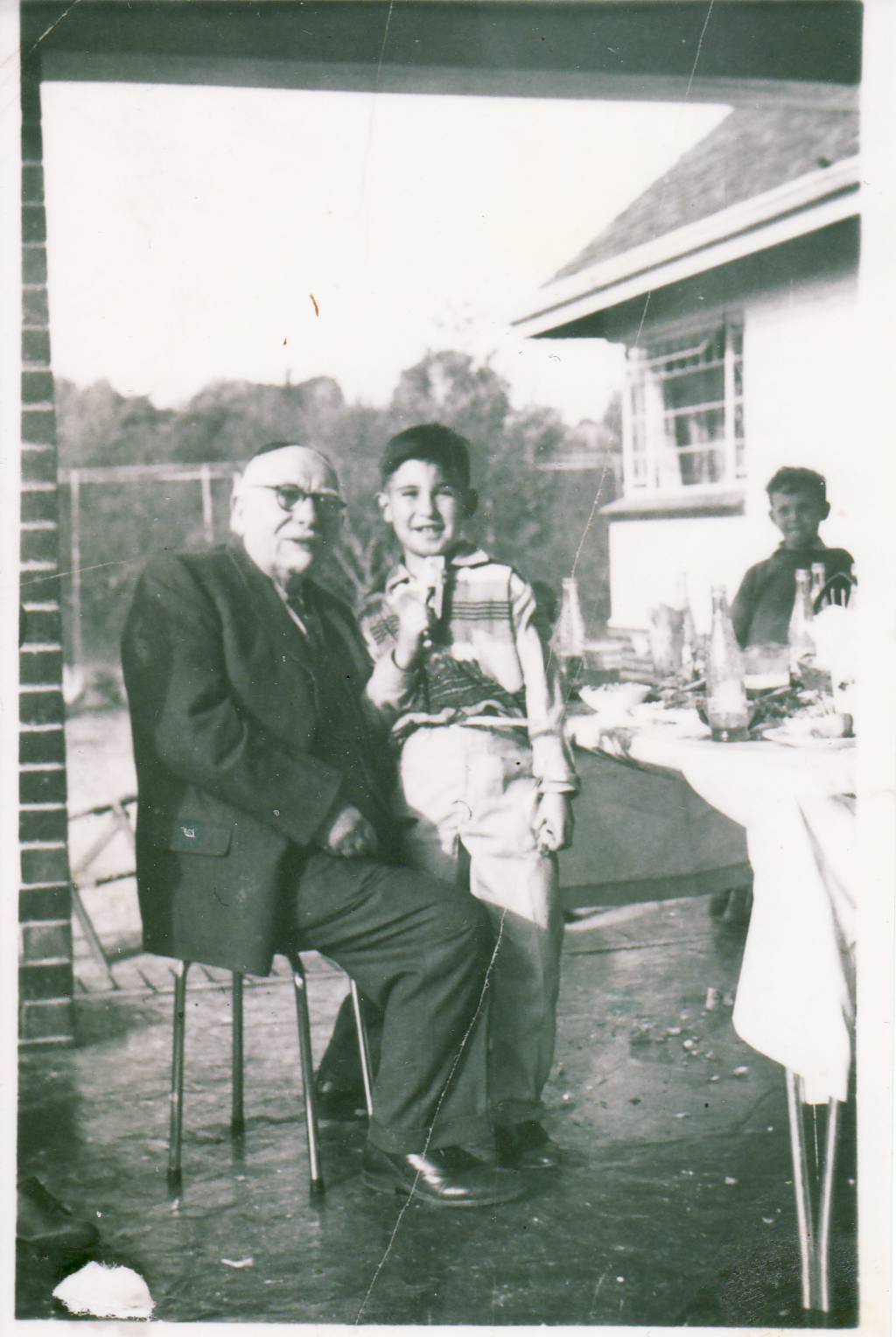 I was sent this photo this morning by Abe Gulis in Israel.

Who is clever or old enough to know who is in this photo and what the occasion was?

My Zaida, Rev Nachum Mendel Rabinowitz of the Vredehoek Shul is third from the left in the second row from the front.

Two away from him in the middle of the row is Chief Rabbi Israel Abrahams, of the Gardens Shul.

I believe it was taken on the occasion of the visit to Cape Town of Rabbi Yosef Shlom Kahaneman, the Ponevezher Rav.

He is seated on Rabbi Abrahams’s left (with a white beard).

Identification and comments are welcome!

Do you have any South African Jewish community photos like this? Please share with us.
I am setting up JewishGen Kehilalink websites for several cities and towns and this is exactly the kind of material I am looking for!
These photos are priceless. Imagine the hundreds of photos lying around in boxes which no one will ever see or understand! What a waste!
We must not lose our S A Litvak heritage!!!!
Please email your photos now, so that we can honour the memory of those who contributed so much to the Jewish life of South Africa!
Best regards & G’mar Chamitah Tova
Eli

Yosef Shlomo Kahaneman (1886–1969), יוסף שלמה כהנמן, was an Orthodox rabbi and rosh yeshiva of the Ponevezh yeshiva. He was a renowned Torah and Talmudicscholar, a distinguished member of the Council of Torah Sages of Agudath Israel, a man of deep piety and sharp wit.

Rabbi Kahaneman was born in Kul, Lithuania, a small town of about 300 of which about a third were Jews.[1] As a young boy he attended the Yeshivah in Plunge lead by Rabbi Chaim Yitzchak Hacohen Bloch, who is credited for cultivating Rabbi Kahaneman’s great potential.[2] At the age of 14 he went to study Talmud at the Telshe yeshiva, where he studied Torah until he was twenty, under the direct inspiration of Rabbi Eliezer Gordon, who saw his potential. Another mentor of his in Telshe at the time was Rabbi Shimon Shkop. He then spent a half year in Novardok yeshiva, after which he spent three years in Raduń Yeshiva studying under the tutelage of the Chofetz Chaim and Rabbi Naftoli Trop. He married the daughter of the rabbi of Vidzh, and became rabbi there at the end of 1911, when his father-in-law became the rabbi of Vilkomir (Ukmergė).

With the passing of Rabbi Itzele Rabinowitz in 1919, Rabbi Yosef Shlomo Kahaneman was appointed the new rabbi of Ponevezh (Panevėžys), one of the largest centres of Jewish life in Lithuania. There, he built three yeshivas as well as a school and an orphanage. He was elected to the Lithuanian parliament. All of his institutions were destroyed and many of his students and family were killed during World War II.

Rabbi Kahaneman emigrated to the British Mandate of Palestine in 1940 and built Kiryat Ha-Yeshiva (“Town of the Yeshiva”) in Bnei Brak and Batei Avot orphanages. Rabbi Kahaneman travelled widely in the diaspora to secure financial support for his yeshiva, which he constantly improved and extended. With the help of long time friend Rav Moshe Okun, Rabbi Kahaneman succeeded in the face of opposition in turning the re-established Ponovezh yeshiva into one of the largest in the world.

He sought to take care of many orphans and tried to rescue them from the clutches of secular Zionist organizations, especially the Yaldei Tehran (“Children of Tehran”) – children who escaped from Nazi Europe by walking across Europe to Tehran (including the famous Biala Rebbe – Rabbi Ben Zion Rabinowitz).

In contrast to the prevalent haredi opposition to Zionism, Rabbi Kahaneman showed some signs of support for the State of Israel. For instance, he insisted that the flag of Israel be flown outside of the Ponovezh Yeshiva on Israel’s Independence Day (a practice still continued to this day).[3] He also refrained from saying the Tachanun prayer, a daily prayer of penitence, on that day as a sign of celebration. When asked about the apparent hypocrisy for his not saying the Hallel prayer, a prayer of active celebration, he answered jokingly that he was following the practice of David Ben Gurion who also didn’t say Hallel or Tachanun on that day.[4]

Following Israel’s military successes of the Six Day War, he published an article which included the following:

My dear brothers! Can we allow ourselves to be small minded at this great and awesome hour? Should we not be embarrassed to remain unobservant of this wondrous period, when we are surrounded by obvious miracles, and even a blind person can sense the palpable miracles… the miracles, wonders, salvations, comforts and battles [Ed. a reference to the Al HaNissim prayer recited on Purim and Hannukah], that occurred in the Holy Land and in the Holy City [Ed. of Jerusalem] and the Temple Mount, even those who saw it with their own eyes, even those who experienced it themselves, they cannot manage to express the depths of their emotions. Perhaps one like myself who was wandering during those days among the Jewish communities in the Diaspora, is better capable of recognizing the tremendous miracles and can consider the nature of these wondrous events.