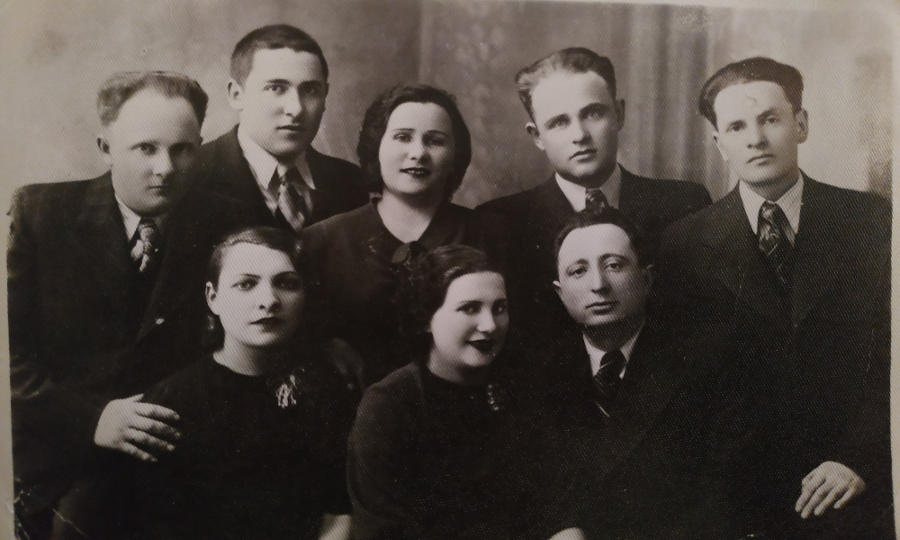 In the book Shtetl by Eva Hoffman a vivid tale is told of the barbaric treatment of the Jews by the Russian Cossacks who kidnapped Jewish men and young boys to force them into the army. They would target the poor and the tailors. It was during one of these village raids that Eliezer was a victim of these marauding thugs when he was forcibly taken from his family. The precise date was unknown to Edel who was a young boy and could hardly remember his father but would have been after 1915 the date of Mera Sheina’s birth. He was never seen again and was probably killed by these Cossacks for refusing to enlist and fight or may have succumbed to his ill treatment.

Sora Lieba had an older brother Sam Chonin (subsequently changing his name to Cohen) who had two daughters Dinah and Sadi. He left Lithuania long before Edel emigrated and settled in Beaconsfield, a suburb of Kimberley in South Africa. He opened a general dealer’s business on the main street of Beaconsfield.

Edel attended cheder as this was the only form of education available to the young Jewish children and like his father, he was tailor as there were few other opportunities for the Jewish people in Eastern Europe. They lived in a typical wooden shtetl home and were barely able to survive. They only spoke Yiddish at home but Edel was able to read and write in Hebrew.

When Edel turned 17 in 1929 his mother encouraged him to leave Utena to join her brother Sam in Kimberley, South Africa. She was concerned for his safety from the Cossacks who regularly raided the Jewish villages and the poverty they lived in with little if no opportunities to improve their quality of life. Edel boarded the Toledo arriving in Cape Town according to the ship’s passenger list on September 25, 1929. He left behind his mother who was about 46 years old and his sister who was about 14 years old.

Mera Sheina according to the passport database register applied for and was granted a passport on November 27, 1929 very soon after Edel emigrated from Lithuania. When Mera Sheina turned 24 she married Leiba Ozur on February 19, 1939 in Utena and according to the marriage register the Rabbi presiding over the marriage was Aronas Kacas with two witnesses Vulfas Sapiro and Mendelis Peleris. Both families were residents of Utena.

Mera Sheina married into a family who would appeared to have been accused of anti-communist activisms. At the time of her marriage Lithuania was controlled by and governed by Russia and was also during the period when the dictator Stalin was in power. He had introduced draconian laws that imprisoned and killed innocent people regardless of race, nationality, religion or party affiliations. He and his secret police were on a mission to eradicate any form of opposition or activity that was deemed to be counter-revolutionary. Stalin would only permit the so-called “Communist Religion” and those in the “intelligentia” (the intellectuals or educated class) who opposed his ruthless laws were either killed, tortured or exiled.

In 1940 Leiba and Mera Sheina had a daughter Leya and in the following year in 1941 they together with the entire Ozur family were exiled to Siberia. The conviction order cited the laws of the NKGB (People’s Commissariat of State Security) of Lithuanian, Latvian, Estonian SSR 1941-1945. They were sentenced to special treatment in the Tomsk region. Only one of Leiba brothers who was an anti-communist activist was sent to a Russian Gulag which was a prison that was responsible for the brutal torture and slaughter of many innocent people. Leiba, Mera Sheina and their daughter, Leya were banished to Siberian small villages. They lived in Voronich and Parbig settlements before finally settling in Tomsk which had specialized schools for deaf children. A Rehabilitation Order (rescinding or terminating the exile conviction order) appears to have been issued in 1957 which would have allowed the family freedom of movement and location. Tomsk is located in the South Western region of the Siberia. It appears as if there are today a mere 4,000 Jews living in Tomsk with an assimilation rate of close to 90%. Obviously when Leiba, Mera Sheina and Leya finally settled in Tomsk there would have been even fewer Jews than today’s population. Because of the severe conditions that they had to live in, wooden shacks, without heating and adequate insulation Leya contracted meningitis that left her deaf and dumb. Although they left the smaller villages to seek better living conditions for Leya they were unable to find adequate Jewish institutions that would provide the necessary support for Leya’s education and care. They tried to join a regular Jewish congregation but Leya was unable to participate because of her hearing and developmental impairment. They were left with little alternative but to seek support from non-Jewish institutions which exposed Leya to the influence of Russian culture and adopting atheism. It would also appear that Leiba who was a religious observant Jew, as Leya remembers he often prayed, did not encourage his daughter to remain faithful to her roots and her Jewish heritage. It should also be recognized that during the Stalin dictatorship era religious practices were forbidden if not banned.

In South Africa as a mark of solidarity when Melissa (Edel’s granddaughter) had her batmitzvah in 1988 she was paired with a young Russian Jewish girl, Reeva Borsova, as she was not permitted to have her batmitzvah. Hence this pairing was intended to relay to the batmitzvah girls the privilege they enjoyed in having religious freedom while their Russian counterparts were being persecuted for their religious beliefs.

Mera Sheina died in 1964 at the age of 49 years from ovarian cancer when Leya was 24 years. While she was hospitalized and suffering from her terminal condition her daughter Leya recalls her mother appealing for her brother Edel to come and help her. Both Edel and Mera Sheina had no idea where each other where living. Both had tried to initiate contact with each other by using Russian authorities and through the assistance of the International Red Cross but without any success whatsoever. She died without knowing what had happened to both her mother and her brother living in South Africa. Leiba died in 1977 when Leya was 37 years old.

Without a traditional Jewish upbringing Leya married a Russian who was also hearing impaired and had a daughter Ludmila. Because of their disability Leya and her husband were unable to raise their daughter. Ludmila also married outside of the Jewish faith and had a daughter Nadezhda and a son, Mikhail. Nadezhda (Nadia) married Artur Fedotov who was the key to re-establishing the link with the Chonin family as he frequently engaged in research to trace family connections. He had created his family tree on Myheritage website that identified a similar family structure in the family tree of Leon Chonin on Geni website. Soon after identifying this link Ludmila died in March 2019 also of ovarian cancer a mere month before formal contact was restored between the families. Her husband had predeceased her when he passed away in 2006.

After the fall of communism in the 1990 the surviving members of the Ozur family emigrated to Israel leaving behind Nadia, her brother Mikhail, her mother Ludmila and her granny Leya. They were the only remaining direct descendants of Mera Sheina.

Gemma Moshal (Edel’s great granddaughter) as part of her school Heritage project also created a similar family tree on Myheritage website with the help of Melissa from the data sourced from Leon Chonin family tree on Geni website. Once again this created a link with Artur Fedotov family tree on Myheritage which inspired Artur to make contact with Melissa who then passed on the information to her father Leon Chonin. Almost at the same time Nadezhda (Nadia) after researching the Chonin name discovered Barbara Chonin name on the Ontario Ballet School website and left a message that she had called. These, sequence of events, led to the re-establishment of contact between Nadia and Leon. The credit for this miracle is largely due to Gemma’s project that not only initiated the research but gained her an award for this project that was presented to her in Tel Aviv, Israel.

While it is tragic that a brother and a sister who so closely resembled each other were never re-united in life but only after 90 years, since parting, did their off spring re-establish a unique family bond. These circumstances while heartbreaking for the family was not unique to the Jewish people in Eastern Europe. Millions were executed by the Nazi Germans and their collaborators, the Russian Cossacks under the Czar or by the Russian Communists under Stalin. Its important that we as a family recognize the pain and suffering endured by our family and by the Jewish people. We need to appreciate the liberty we have and never forget the sacrifices made by our ancestors so that we have the opportunity to live in freedom and safety.

Hashem works in amazing ways and it is hoped that the re-unification of the Chonin family will encourage the return of the entire family to their religious roots.

that describes the story of Edel Chonin in more detail.