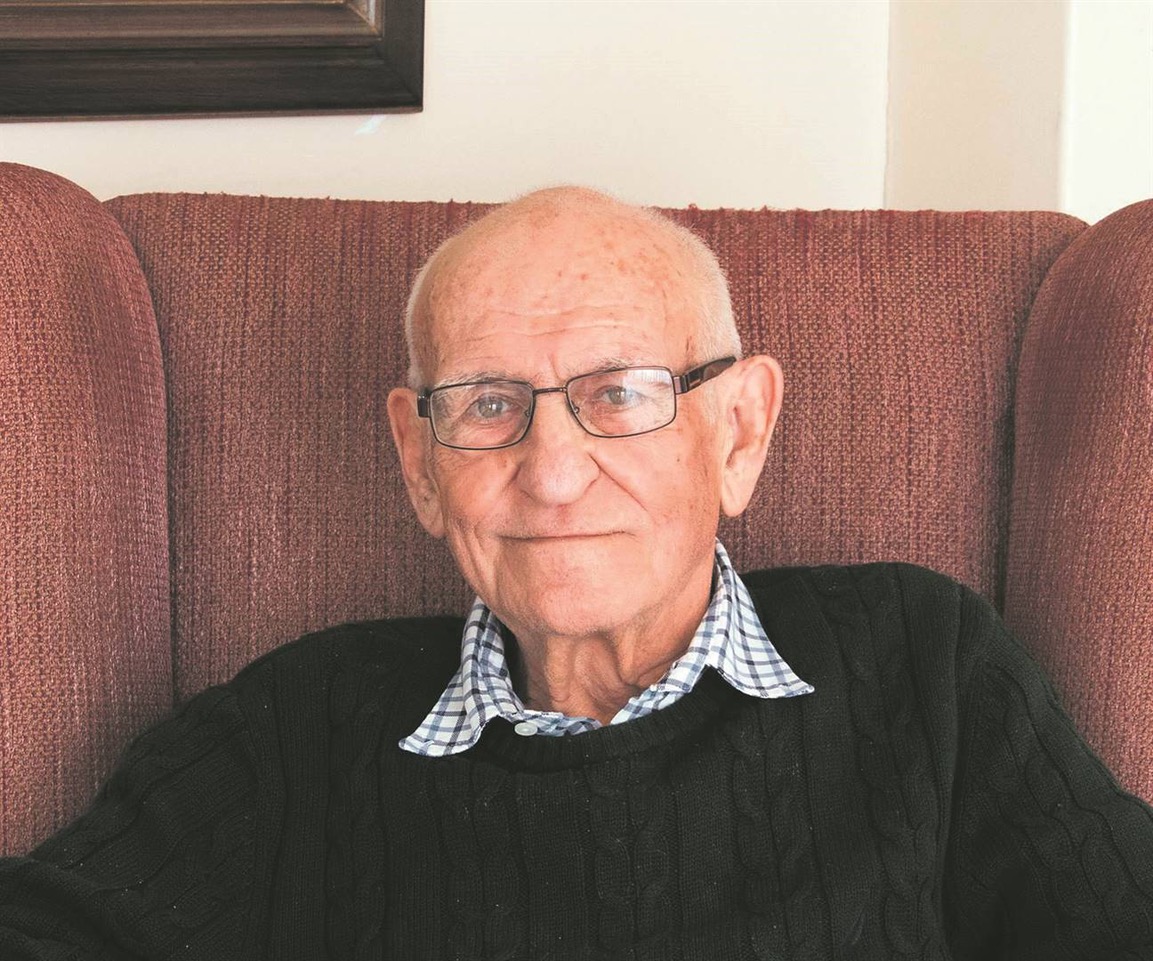 Leonard’s father Julian was a founder member of the Progressive Judaism movement in Cape Town in the 1940s and brought his son in, where he rose to be President of Temple Israel. Leonard’s admiration and enthusiasm for the Reform movement and his high regard for Rabbi David Sherman, saw him fully committed, and even more so when he and his wife Ruth moved next door to the Temple in Wynberg! Besides presidential and general duties, his contribution included his role as Editor of the annual magazine, and leader of many shiurim and lay services.

Leonard was a man of great intellect, blessed with a sharp mind, quick wit and erudition. His general knowledge was wide and often obscure, his interests ranging from music (he hosted classical soirees), maths (he calculated without a calculator), history, religion, literature, cricket and cryptic crosswords (he called himself a cruciverbalist). He delighted nothing more than to encourage his grandchildren to discuss with and question or challenge him on all topics.

In the words of Rabbi Richard Newman, “He made me think, made me see things from a different perspective, made me realise that here was a man to whom I could turn, for advice and counsel. Here was a man whose knowledge was only superceded by his wisdom. There was a wealth of life, welling forth, a font of meaningful words backed up by well-tempered thought. Here was a saintlike mortal, stretching out his hands to those around him.”

Leonard is regarded as the person who has made the greatest and longest impact on South African chess. Former SA champion David Friedgood describes him as “truly South Africa’s Mr Chess”, with a background as player and correspondence player, captain of the SA team to various internationals and Olympiads, and organizer of major chess events, as well as a stint as President of the SA Chess Federation. Leonard was a chess resource, buying and selling books and publications, and at one stage his home library was regarded as the largest in the southern hemisphere! He single-handedly compiled The South African Chess Player magazine, publishing it for over thirty years, and wrote several Test Your Chess books and other works. His magnum opus, A History of Chess in South Africa, was a labour of love for the game and sold internationally, its author a major force and reputation.

Dr Lyndon Bouah, Director of Sport & Recreation, Western Cape Government, has been appointed as the custodian of Leonard’s “chess world”. He says, “As I have known Mr Reitstein for over twenty years I was honoured and privileged to be requested to be the custodian. The chess material consists of books, magazines and particularly hundreds of copies of The South African Chess Player, documents, minute books, photographs and memorabilia.” These are being collated and digitised for a future public display in Leonard’s honour.

Leonard Raymond Reitstein was born in Cape Town on 6th June 1928. He was the third child of Polish born Julian, and first of English born Greta. His older siblings were Claude and Raie (Gurland) and his younger, Maurice, all deceased.

He attended Sea Point Boys and Oudsthoorn School, and graduated as a bookkeeper accountant. Most of his working life was at Blumberg & Kleinman and for the Jewish Board of Deputies.

Leonard married Ruth Saevitzon of Wynberg in 1953; a long, happy and devoted partnership that lasted over sixty five years. They lived in Newlands and Wynberg, and moved into Highlands House two years ago.

Leonard is survived by his wife Ruth and his children Jillian, Anthony and Michelle. He has five grandchildren and seven great grandchildren, living as far afield as Cape Town, Ra’anana, Sydney, Perth and London! 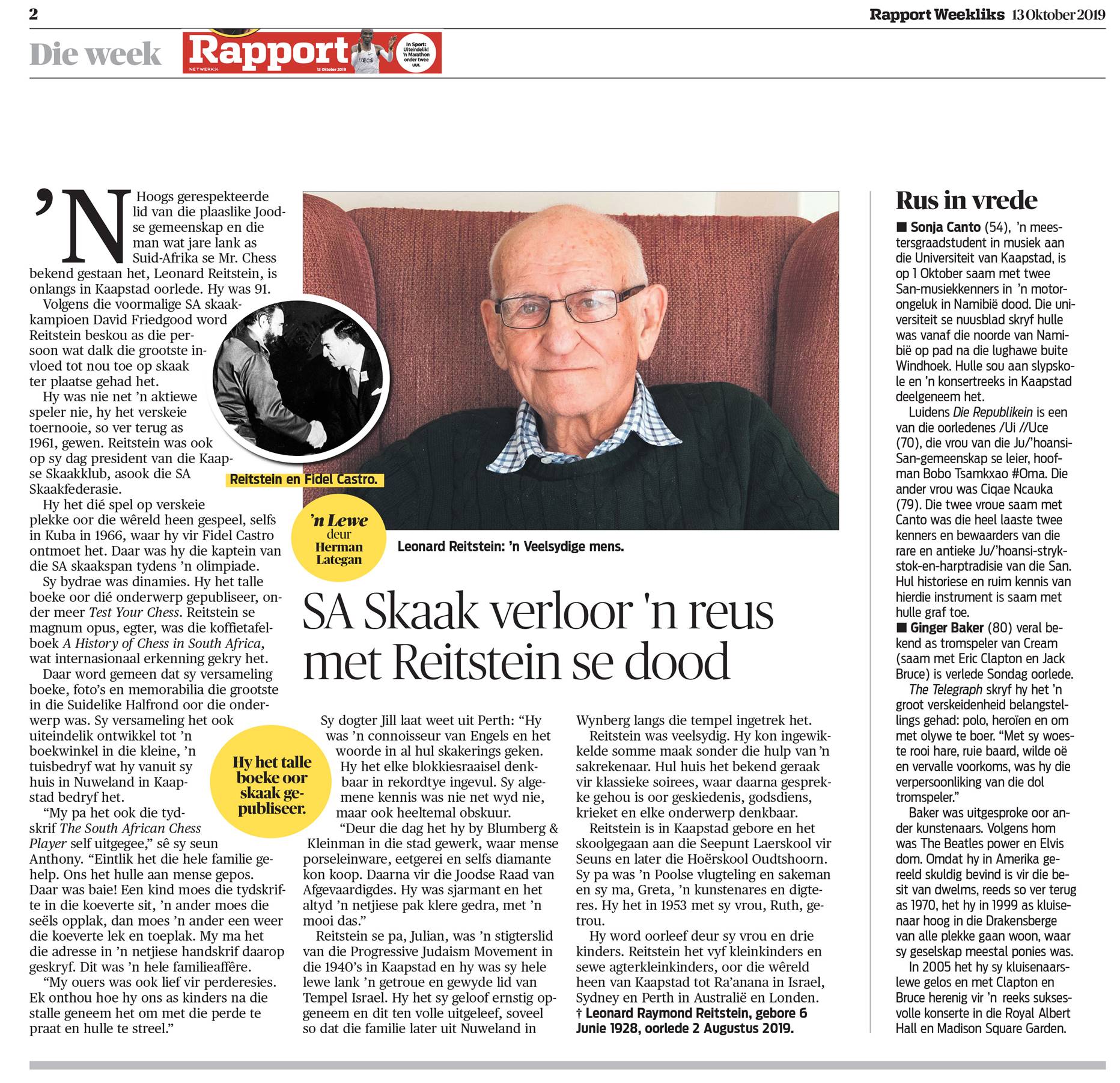 A life: SA Chess loses a giant with Reitstein’s death

A highly respected member of the local Jewish community and the man who for many years served as South Africa’s Mr. Chess, Leonard Reitstein, recently died in Cape Town. He was 91.

Former SA chess champion David Friedgood says Reitstein is considered the person who may have had the biggest influence on chess on the ground so far.

Not only was he an active player, he won several tournaments, as far back as 1961. Reitstein was also president of the Cape Chess Club, as well as the SA Chess Federation.

He played this game in various places around the world, even in Cuba in 1966, where he met Fidel Castro. There he was the captain of the SA chess team during an Olympics.

His contribution was dynamic. He has published numerous books on the subject, including Test Your Chess. Reitstein’s magnum opus, however, was the coffee table book A History of Chess in South Africa, which received international recognition.

He has published numerous books on chess.

His collection of books, photos and memorabilia is believed to be the largest in the Southern Hemisphere on the subject. His collection also eventually developed into a bookstore in the small, a home business he operated from his home in Newlands, Cape Town.

“My dad also published The South African Chess Player magazine himself,” says his son Anthony. “The whole family really helped. We posted them to people. There were many! One child had to put the magazines in the envelopes, another had to put up the seals, then another had to lick and apply the envelopes again. My mother wrote the addresses in a neat handwriting on it. It was a whole family affair.”

“My parents also loved horse racing. I remember how he took us to the stables as kids to talk to the horses and caress them. ”

His daughter Jill from Perth: “He was a connoisseur of English and knew words in all their shades. He completed every crossword puzzle imaginable in record times. His general knowledge was not only wide, but also completely obscure.

“Throughout the day he worked at Blumberg & Kleinman in the city, where people could buy porcelain ware, cutlery and even diamonds. Then for the Jewish Board of Deputies. He was charming and always wore a neat suit, with a nice tie. “ 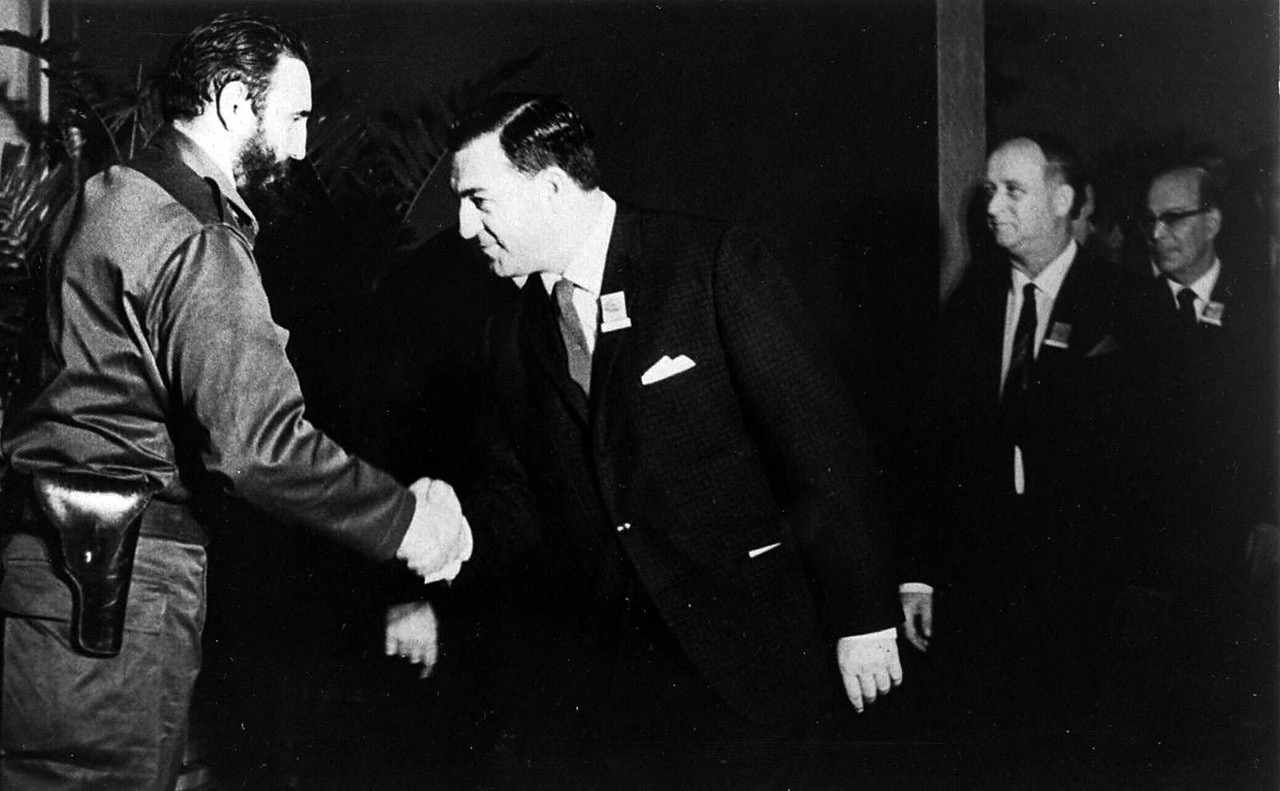 Reitstein’s father, Julian, was a founding member of the Progressive Judaism Movement in the 1940s in Cape Town and has been a faithful and devoted member of Temple Israel all his life. He took his faith seriously and lived it to the full, so much so that the family later moved out of Newlands into Wynberg next to the temple.

Reitstein was versatile. He could make complicated sums without the help of a calculator. Their home became known for classical soirees, where afterwards talks were held on history, religion, cricket and every subject imaginable.

Born in Cape Town, Reitstein attended school at Sea Point Primary School for Boys and later Oudtshoorn High School. His father was a Polish refugee and businessman and his mother, Greta, an artist and poet. He married his wife, Ruth Saevitzon, in 1953.

He is survived by his wife and three children. Reitstein has five grandchildren and seven great-grandchildren, all over the world from Cape Town to Ra’anana in Israel, Sydney and Perth in Australia and London. † Leonard Raymond Reitstein, born June 6, 1928, passed away August 2, 2019.