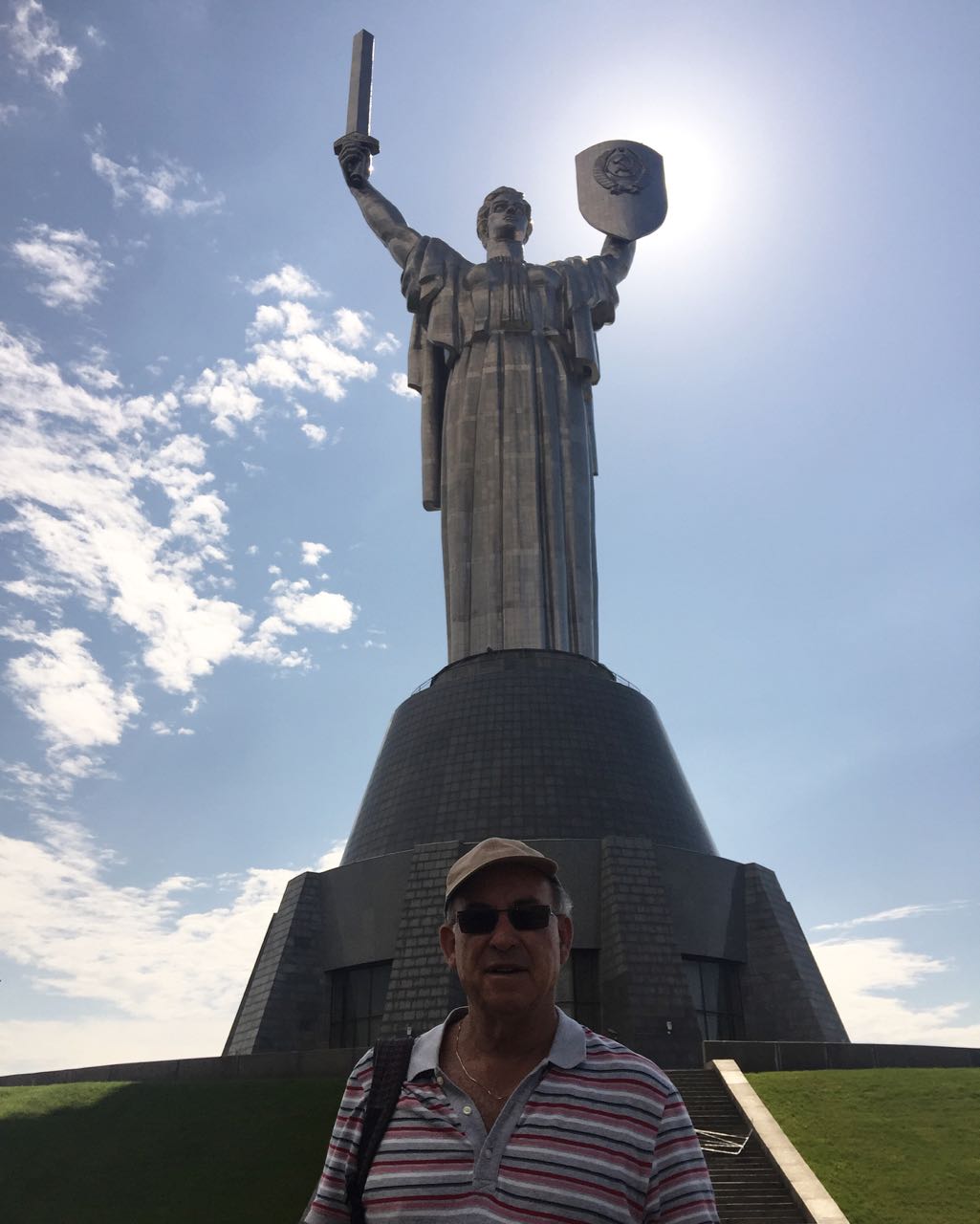 The walk through the park to the Military Museum, Lavra, and and back to Arsenal 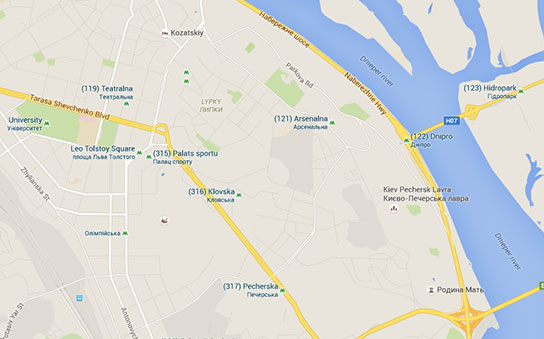 Museum of The History of Ukraine in World War II

The National Museum of the History of Ukraine in World War II (Ukrainian: Музей історії України у Другій світовій війні, Russian: Музей истории Украины во Второй мировой войне) is a memorial complex commemorating the German-Soviet War located in the southern outskirts of the Pechersk district of Kiev, the capital of Ukraine, on the picturesque hills on the right-bank of the Dnieper River.[1]

The museum was moved twice before ending up in the current location where it was ceremonially opened on May 9 (the Victory Day), 1981, by the Soviet leader Leonid Brezhnev. On June 21, 1996, the museum was accorded its current status of the National Museum by the special decree signed by Leonid Kuchma, then the President of Ukraine.

It is one of the largest museums in Ukraine (over 300 thousand exhibits) centered on the now famous 62-meter tall Motherland statue, which has become one of the best recognized landmarks of Kiev. The museum has been attended by over 21 million visitors.

The memorial complex covers the area of 10 hectares (approximately 24.7 acres) on the hill, overlooking the Dnieper River. It contains the giant bowl “The Flame of Glory”, a site with World War II military equipment, and the “Alley of the Hero Cities“. One of the museums also displays the armaments used by the Soviet army post World War II. The sculptures in the alley depict the courageous defence of the Soviet border from the 1941 German invasion, terrors of the Nazi occupation, partisan struggle, devoted work on the home front, and the 1943 Battle of the Dnieper.

Until July 2015 the official name of the museum was Museum of the Great Patriotic War.[2] In April 2015, the parliament of Ukraine outlawed references to the term “Great Patriotic war” as well as Communist symbols, street names and monuments, in a decommunization attempt.[3] On 16 May 2015 Minister of Culture Vyacheslav Kyrylenko stated the museum will change its name.[4] Two months later the museum officially changed its name.[2]

The Motherland Monument (Ukrainian: Батьківщина-Мати, Russian: Родина-мать) is a monumental statue in Kiev, the capital of Ukraine. The sculpture is a part of the Museum of The History of Ukraine in World War II, Kiev.[1] The stainless steel statue stands 62 m (203 ft) tall upon the museum building with the overall structure measuring 102 m (335 ft) and weighing 560 tons. The sword in the statue’s right hand is 16 m (52 ft) long weighing 9 tons, with the left hand holding up a 13 by 8 m (43 by 26 ft) shield with the State Emblem of the Soviet Union. The Memorial hall of the Museum displays marble plaques with carved names of more than 11,600 soldiers and over 200 workers of the home-front honored during the war with the title of the Hero of the Soviet Union and the Hero of Socialist Labor. On the hill beneath the museum, traditional flower shows are held. The sword of the statue was cut because the tip of the sword was higher than the cross of the Kiev Pechersk Lavra.[2]

In the 1950s a plan circulated of building on the spot of the current statue twin monuments of Vladimir Lenin and Joseph Stalin, nearly 200 m (660 ft) tall each.[3] However, this did not go ahead. Instead, according to legend, in the 1970s a shipload of Communist Party officials and Soviet sculptor Yevgeny Vuchetich looked across at the hills by the Lavra and decided the panorama needed a war memorial. Vuchetich had designed the other two most famous giant Soviet war memorials, The Motherland Calls in Volgograd and the Soviet soldier carrying German infant constructed after the war in East Berlin. However, Vuchetich died in 1974, and the design of the memorial was afterwards substantially reworked and completed under the guidance of Vasyl Borodai.

Final plans for the statue were made in 1978, with construction beginning in 1979. It was controversial, many criticised the costs involved and claimed the funds could have been better spent elsewhere. When director of construction Ivan Petrovich was asked to confirm the costs of 9 million roubles, he responded that this was a conservative estimate. The statue was opened in 1981 in a ceremony attended by Soviet president Leonid Brezhnev.

In modern-day Kiev, the statue remains controversial, with some claiming it should be pulled down and its metal used for more functional purposes. Financial shortages mean that the flame, which uses up to 400 m3 (14,000 cu ft) of gas per hour, can only burn on the biggest national holidays, and rumours persist that the statue is built on unstable foundations, something strongly denied by the Kiev local government.[4][5]

In April 2015, the parliament of Ukraine outlawed Soviet and Communist symbols, street names and monuments, in a decommunization attempt.[6]But World War II monuments are excluded from these laws.[7]

A scene in the 2006 novel World War Z depicts a Ukrainian tank commander and his surviving men fleeing in their vehicles from an abandoned and burning Kiev under the watchful gaze of the Rodina-Mat.

The monument is prominently featured in the music video for the song “Get Out” by the band Frightened Rabbit.[8]

Audio from the service

Kyiv Pechersk Lavra[3][4] (Ukrainian: Києво-Печерська лавра, Kyievo-Pechers’ka lavra, Russian: Киeво-Печерская лавра, Kievo-Pecherskaya lavra), also known as the Kiev Monastery of the Caves, is a historic Orthodox Christian monastery which gave its name to one of the city districts where it is located in Kiev.

Since its foundation as the cave monastery in 1051[5] the Lavra has been a preeminent center of Eastern Orthodox Christianity in Eastern Europe. Together with the Saint Sophia Cathedral, it is inscribed as a UNESCO World Heritage Site.[6][nb 1] The monastery complex is considered a separate national historic-cultural preserve (sanctuary), the national status to which was granted on 13 March 1996.[8] The Lavra is not only located in another part of the city, but is part of a different national sanctuary than Saint Sophia Cathedral. While being a cultural attraction, the monastery is currently active. It was named one of the Seven Wonders of Ukraine on 21 August 2007, based on voting by experts and the internet community.

Currently, the jurisdiction over the site is divided between the state museum, National Kiev-Pechersk Historic-Cultural Preserve,[9] and the Ukrainian Orthodox Church (Moscow Patriarchate) as the site of the chief monastery of that Church and the residence of its leader, Metropolitan Onuphrius. 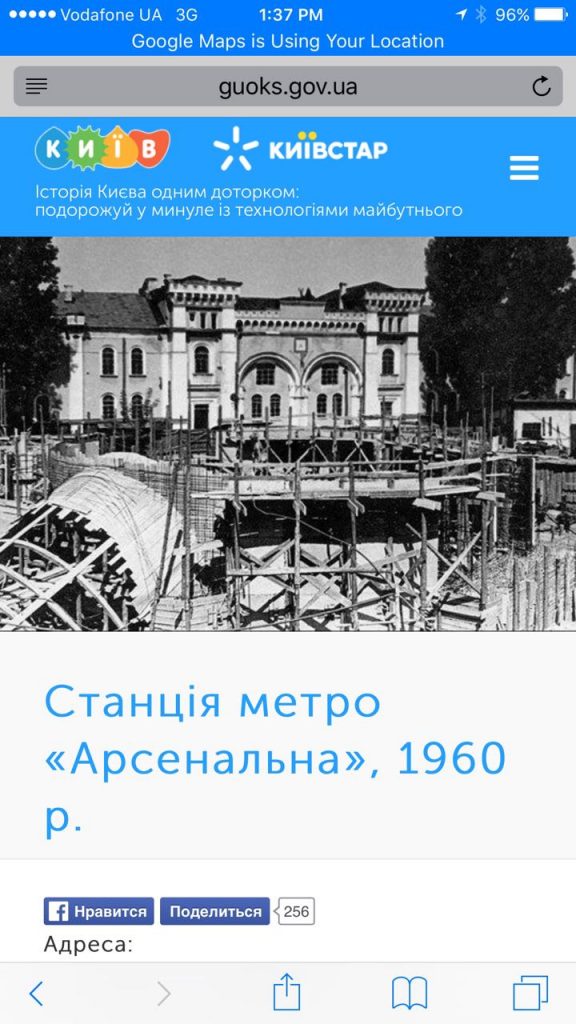 Arsenalna (Ukrainian: Арсенальна) is a station on Kiev Metro‘s Sviatoshynsko-Brovarska Line. The station was opened along with the first stage and is currently the deepest station in the world (105.5 metres).[1] This is attributed to Kiev’s geography where the high bank of the Dnieper River rises above the rest of the city. Also unique is the station’s design which lacks a central concourse thus similar in layout to stations on the London Underground.

Although Arsenalna (architects H.Hranatkin, S.Krushynsky, N.Shchukina) appears as a pylon trivault, the “Pylons” along with their portals are all purely cosmetic decoration. Pink marble walls with bronze grills (that feature metallic artwork on Soviet themes) is all that is present in the portal. Instead the station has a small lobby which is directely connected to the escalator tunnel. The ride on the escalators itself is one of the longest totaling up to five minutes. 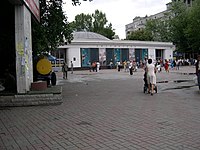 The layout of the stations has reasons, as the cosmetic pylons were planned to be real. The main one comes from the tough soils of the location and the problems with hydroisolation which forced the builders to conserve the design. Similar problems happened on the first stage in Moscow however later the stations Lubyanka and Chistye Prudy were completed. In Kiev this never was to happen. Originally built as an interim on a long track before the line crossed the Dnieper and continued into the left bank residential districts, it was never to have a large passenger traffic to justify a complex and costly reconstruction. Nor was the station ever planned to be a transfer point (unlike the Moscow stations, which ultimately was the reason for them to be rebuilt). Thus with the Kiev Arsenal Factory, for which the station was named, being the only human source of passengers, this station is likely to remain as it is permanently.

Decoratively, apart from the spoken portals, the station is monochromatic in its appearance. The plastered vault ceilings, ceramic tiled walls and the marbled “pylons” all are of white colour. A large sculptural artwork depicting revolutionary events that took place in the Arsenal factory in 1918 graced the wall of the main lobby hall until it was removed in the early 1990s.

The station’s large surface vestibule is situated on the square leading onto Ivana Mazepy, Moskovska and Mykhailo Hrushevsky streets. Behind the station is a service bay that is used for nighttime stands and minor repairs to the railcar park.