A Study Guide In English

Translatable into 103 other languages by clicking on “Translate” bottom right.

The title, “Zog Nit Keynmol”  means ” Never Say” and was derived from the first line of the poem  written in 1943 by Hirsh Glik, a young Jewish inmate of the Vilna Ghetto. 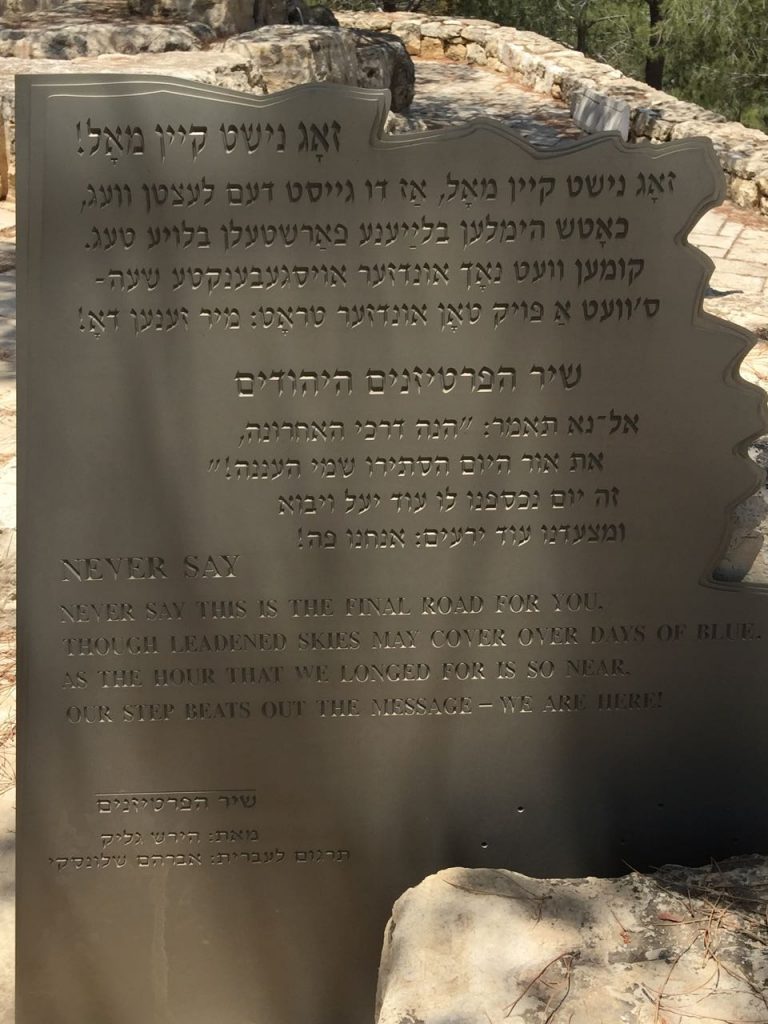 With Yiddish words by Hirsh Glik and music by Dmitri and Daniel Pokrass, “Zog Nit Keynmol” became the anthem of the Jewish underground resistance movement in World War II. Hirsh Glik’s lyrics were combined with a march melody from the 1938 Soviet film Son of the Working People to create the inspiring song “Zog Nit Keynmol.” Following the end of World War II “Zog Nit Keynmol” has frequently been sung at Holocaust commemorations worldwide, particularly on Yom Hashoah.

The words to “Zog Nit Keynmol” reflect the author’s strong belief in Jewish armed resistance to Nazi oppression. Like many other partisan songs, “Zog Nit Keynmol” served to reinforce Jewish identity and maintain camaraderie in an environment where heroism was required and death was commonplace. Refusing to admit defeat or accept the possibility that Jewish life in Europe was doomed, the song’s lyrics are defiant and optimistic.

Knowing that Jewish communities in Eastern Europe were being destroyed all around them, Jewish partisans employed armed resistance to oppose Nazism. Glik’s lyrics to “Zog Nit Keynmol” helped to sustain the partisans as they risked their lives while forging another link in the long tradition of Jewish poetry dedicated to maintaining unity against hostile outside forces. 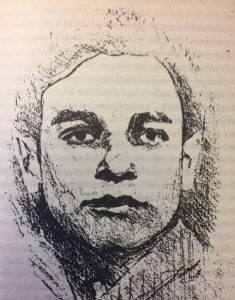 Hirsh Glik was born in Wilno (now Vilnius) in 1922 which was then in Poland. He began to write poetry in Yiddish in his teens and was a co-founder of Yungwald (Young Forest), a group of young Jewish poets. Hirsh Glik entered the Vilna Ghetto after the Nazi assault against the Soviet Union. He involved himself in the ghetto’s artistic community while simultaneously participating in the underground movement and took part in the 1942 ghetto uprising. Hirsh wrote the poem in early 1943. He managed to flee when the ghetto was being liquidated in October 1943 but was recaptured . He was later deported to a concentration camp in Estonia. During his captivity he continued to compose songs and poems. In July 1944, with the Soviet army approaching, he escaped but was never heard from again. It is presumed he was again captured and executed by the Nazis in August 1944.

The words of the Poem

Never say this is the end of the road.

Wherever a drop of our blood falls, our courage will grow anew.

Our triumph will come and our resounding footsteps will proclaim: We are here!

From the land of palm trees to the far off land of snow,

We shall be coming with our torment and our woe.

And everywhere our blood has sunk into the earth, our bravery and vigor will blossom forth!

We’ll have the morning sun to set our days aglow.

Our evil yesterdays will vanish with the foe.

But if time is long before the sun appears, let this song go like a signal through the years.

This song was written with our blood and not with lead.

It’s not a song that summer birds sing overhead.

It was a people amidst burning barricades that sang the song of ours with pistols and grenades.

So never say you go on your last way.

Though darkened skies may now conceal the blue of the day.

Because the hour for which we hungered is so near.

Beneath our feet the earth shall thunder: We are here!

Questions and Topics to consider and discuss:

** Describe the context of the poem: Where and when was it written? Who is his poem about and who was he talking to? Who were the Jewish Partisans?

** Optional – Isaac Rosenberg, Wilfred Owen and Rupert Brooke were WWI poets, from England. Describe how their experiences in WWI differed from Hirsh Glik’s in WWII.

** WH Auden, an English poet, wrote a poem called Refugee Blues. How does Glik and his poem differ from WH Auden and his poem? Why do you think it’s important to compare the two?

** Zog Nit Keynmol has been described as an anthem or hymn. What is meant by this?

** The poem has been translated from Yiddish into other languages. Why and where was Yiddish spoken in Europe?

** The poem has been adopted by others in different genres. Give some examples.

** How relevant is this poem to the world today?

** What do you think the future of this poem will be?

** Language of the poem: The strong themes of the poem are those of hope, optimism, courage, bravery, defiance and resistance. The messages to inspire and reinforce heroism are also clear. It also deliberately uses words conveying violence and death. Pick out the images (words and phrases) that illustrate these themes.

Egs for teachers: Identify how often the future tense is used, such as “will grow” and “will come” which suggests optimism and hope. Also, idyllic scenes conveyed by images such as “resounding footsteps”, “blossom forth”, “morning sun…aglow” suggest a feeling of hope and continuity.

The poem – why it is so important

Phillip Maisel, a Holocaust Survivor and friend of Hirsh Glik, tells us why.