From Wikipedia, the free encyclopedia
(Redirected from Rundāle castle)

Rundāle Palace (Latvian: Rundāles pils; German: Schloss Ruhental, formerly also Ruhenthal and Ruhendahl) is one of the two major baroque palaces built for the Dukes of Courland in what is now Latvia, the other being Jelgava Palace. The palace was built in two periods, from 1736 until 1740 and from 1764 until 1768. It is situated at Pilsrundāle, 12 km west of Bauska. 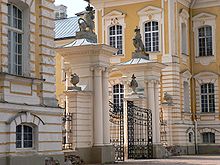 Gate of the palace

It was constructed in the 1730s to a design by Bartolomeo Rastrelli as a summer residence of Ernst Johann von Biron, the Duke of Courland. Following Biron’s fall from grace, the palace stood empty until the 1760s, when Rastrelli returned to complete its interior decoration. Johann Michael Graff produced lavish stucco decorations for the palace during this time.

After Duchy of Courland and Semigallia was absorbed by the Russian Empire in 1795, Catherine the Great presented the palace to Count Valerian Zubov, the youngest brother of her lover, Prince Platon Zubov. He spent his declining years there after the death of Valerian Zubov in 1804. His young widow, Thekla Walentinowicz, a local landowner’s daughter, remarried Count Shuvalov, thus bringing the palace to the Shuvalovfamily, with whom it remained until the German occupation in World War I when the German army established a hospital and a commandant’s office there.

The palace suffered serious damage in 1919 during the Latvian War of Independence. In 1920, part of the premises were occupied by the local school. In 1933, Rundāle Palace was taken over by the State History Museum of Latvia. It was dealt a serious blow after World War II, when the grain storehouse was set up in the premises and later, the former duke’s dining room was transformed into the school’s gymnasium. Only in 1972 was a permanent Rundāle Palace Museum established.[1]

The palace is one of the major tourist destinations in Latvia. It is also used for the accommodation of notable guests, such as the leaders of foreign nations. The palace and the surrounding gardens are now a museum.

Using coordinates to find a site