Here is my interview with Rabbi Levi Wolff.

Rabbi Levi Wolff talks about the visit to Sydney of Kei Sugihara, great grandson of Chiune Sugihara as well as Rabbi Wolff’s own family connection to the Japanese hero who saved so many Jewish lives.

An emotional meeting with an icon’s great-grandson

Read on for article

Descendants of Jews who escaped Nazi Europe through the heroic actions of Japanese diplomat Chiune Sugihara, have met his great-grandson in Sydney.

“Sempo” Sugihara was a Japanese consul in Kaunas, Lithuania who ignored instructions from Tokyo in 1940 and issued exit visas to an estimated 6,000 Jews who successfully escaped the Nazi persecution in World War II.

Visas were also issued ignoring instructions to thousands who were unable to get out of Europe many of whom perished in the Nazi death camps. The exact number of Jews who received visas from Sugihara is unknown but estimates put the number of family visas he issued around 6,000.

Many put the figure of those Jews who are alive today because of Sugihara’s bravery at around 40,000.

For those who made it to Kobe in Japan, life was relatively peaceful as they made their homes amongst the Russian Jewish community which had lived there for over 100 years. But all changed after Pearl Harbour and Japan’s entry into the war and the Kobe-based European Jews were sent to Shanghai. Many moved again to other parts of the world…including Australia.

Accompanying Grynberg were his grandchildren Asher, 13, Maya, 11 and Tali 11 who are the great-grandchildren of the late Dora and Oscar Grynberg who travelled to Kobe on visas issued by Sugihara. 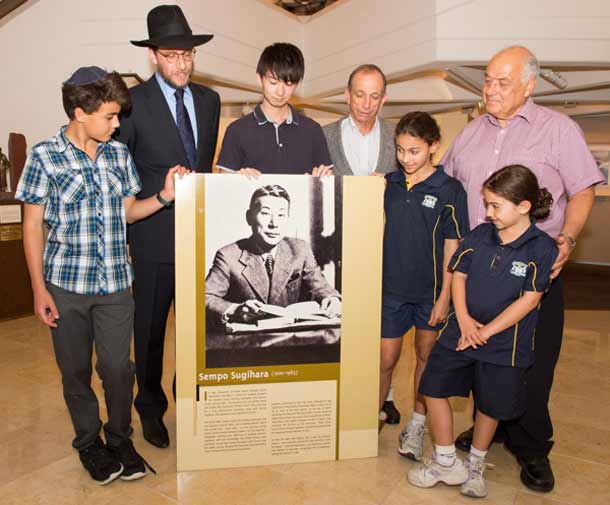 Keisuke or Kei as he prefers to be known has his great-grandfather’s surname only because his mother, Sugihara’s granddaughter, persuaded her husband Nakamura to adopt it in July this year so that it may live on.  Kei explained: “This year my 19-yr-old sister started university so the family thought this would be a good time to change the name.” He told J-Wire the change had been effected specifically to ensure that his great-grandfather’s name would be remembered. 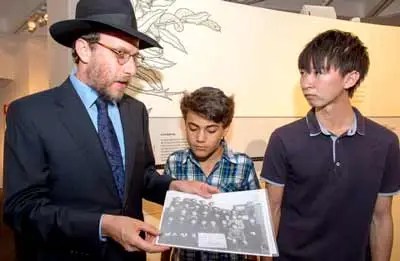 Kei Sugihara believed that his great-grandfather had followed his human instincts in doing what he did saying “I am very proud of him”. Kei was six years old when he  first heard of great grandfather’s life-saving actions. “I learned about it in my elementary school text books and I remember  my father telling me ‘your great grandfather saved a lot of people’.”

On his trip to Australia Kei Sugihara has met Jewish people for the first time in his life…but it won’t be the last. He plans to meet members of other families who are descendants of those his grandfather saved in other parts of the world.

John Roth, Victor Grynberg and Rabbi Levi Wolff told Kei stories of their families’ experiences with Grynberg pointing out that his older brother had been born in Kobe and that John Roth’s father had been the sandek at his brit.

Rabbi Levi Wolff said: “The thousands that he saved had hundred and hundreds of descendants. We’re talking about around forty thousand people are alive today because one man didn’t allow his conscience to let him sleep at night. The power of one is unbelievable.”

Rabbi Wolff told Kei Sugihara: “Your great-grandfather could not handle the fact people were being persecuted and being killed. He could have turned a blind eye to it but he put his life in danger because he felt that it was the right thing to do.” 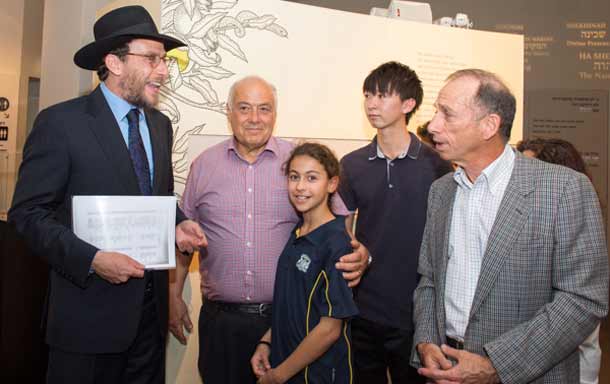 He told Sugihara’s great-grandson that the Japanese consul would not allow what most of the world was turning a blind eye to.

Rabbi Wolff told those gathered at the museum that when Sugihara’s family was traced after the war every effort was made to help them telling Kei that his grandparents were sent to university in Israel.

Rabbi Levi Wolff’s mother’s father Rabbi Yechezkel Deren was a 13-yr-old boy studying in a yeshiva in Poland. The family fled Poland arriving in the Lithuanian city in which Sugihara was based eventually getting a visa from him. As Japan entered the war Rabbi Deren was amongst those who moved to Shanghai. Rabbi Wolff said: “We never knew the story as my grandfather never spoke about it. It was hard for many to relive the experience. He lost everybody in his family except for his sister.” He told Kei that in 1980 Readers Digest did a story on his great-grandfather. That’s when those he had saved sought to find him and his family. He saved more Jews than Schindler.”

Victor Grynberg explained that Schindler had made commercial use of the Jews he saved and that Sugihara had not charged anything for the visas he issued even though some of them may have been onsold.

Rabbi Levi Wolff told J-Wire: “The Jewish people have long memories. We not only remember those who wish to destroy us but we also remember those who stood up for us when others tried to eradicate us. We will not forget what Kei Sugihara’s great-grandfather did for us. I am eternally grateful. Meeting Kei was like paying a debt of gratitude on behalf of my grandfather.”

Victor Grynberg added: “I took Kei to Sydney’s Moriah College and proudly showed him how the Roth and Grynberg families who had benefited from his great-grandfather’s achievements had contributed to the community in which they now live. Meeting Kei has been a highly emotional experience. I remember my late mother at the age of 90 touring provincial area with Courage to Care telling the Sugihara story.”

For John Roth the meeting was hard to grasp. he told J-Wire: “It is hard to comprehend the enormity of what his great-grandfather achieved. Rabbi Wolff choked on his words when he made reference to the 40,000 who live today because of Sugihara’s actions and bravery. I did too.”

When Kei visits Rabbi Wolff’s congregation on Shabbat at Sydney’s Central Synagogue, he will receive a framed Talmudic saying from Rabbi Levi Wolff…”He Who Saves One Life it is as if he has saved an entire world.”

Before returning to Japan to continue his education studies ahead of a hoped-for career in diplomacy, Keisuke Sugihara will travel to Queensland’s Bundaberg to pick fruit.  But his life’s plan also includes extensive world travel and more meetings with Jews who owe their existence to Chiune “Sempo” Sugihara.

A photograph of Sugihara is on permanent exhibition at the Sydney Jewish Museum.

If you or someone you know is a descendant email sugihara@jwire.com.au and J-Wire will pass on your details to Keisuke.

Native name  杉原 千畝
Born 1 January 1900 Yaotsu, Gifu, Japan. Died 31 July 1986 (aged 86)Kamakura, Kanagawa, JapanNationalityJapanese
Other names”Sempo”, Pavlo Sergeivich Sugihara
OccupationVice-Consul for the Empire of Japan in Lithuania. Known forRescue of some ten thousand Jews during the Holocaust
Religion Eastern Orthodox Church
Spouse(s)Klaudia Semionovna Apollonova (m. 1919; div. 1935)Yukiko Kikuchi (m. 1935)
Awards:
Righteous Among the Nations (1985)
Chiune Sugihara (杉原 千畝 Sugihara Chiune?, 1 January 1900 – 31 July 1986) was a Japanese diplomat who served as Vice-Consul for the Empire of Japan in Lithuania. During World War II, he helped several thousand Jews leave the country by issuing transit visas to Jewish refugees so that they could travel to Japan. Most of the Jews who escaped were refugees from German-occupied Poland and residents of Lithuania. Sugihara wrote travel visas that facilitated the escape of more than 6,000 Jewish refugees to Japanese territory, risking his career and his family’s lives. Sugihara had told the refugees to call him “Sempo”, the Sino-Japanese reading of the characters in his first name, discovering it was much easier for Western people to pronounce.[1] In 1985, Israel honored him as Righteous Among the Nations for his actions.

For more, visit the Shanghai Kehilalink at:

2. My visit to the Sugihara House Museum in Kaunas, Lithuania in May. 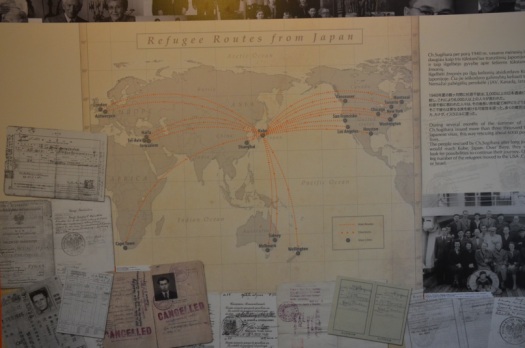 Students with their lecturer, Raimundas Kaminskas. I was asked to address them – May 2014 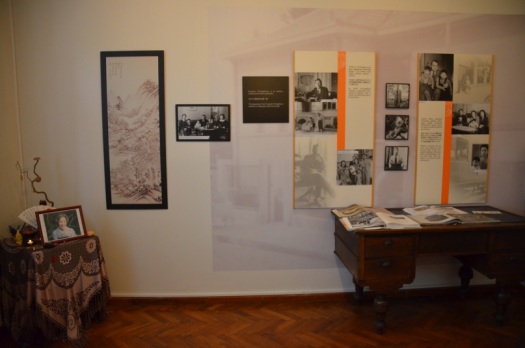 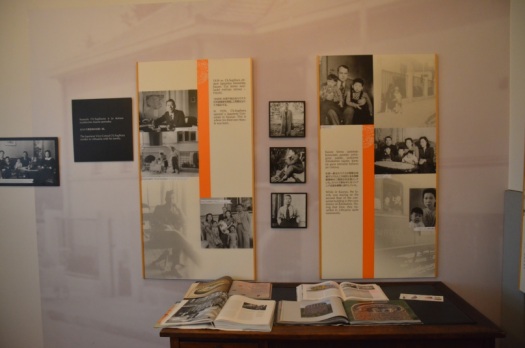 4. Reprinted from J-Wire with permission of Henry Benjamin